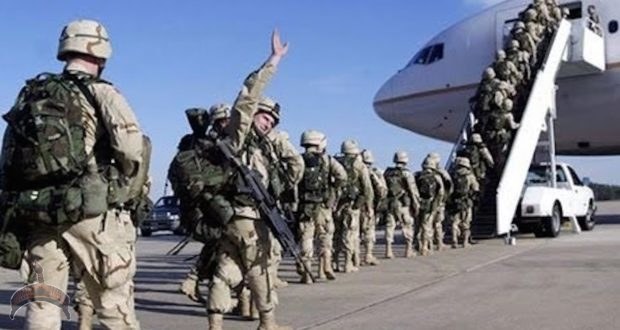 Posted by: BalogunAdesina in World News Comments Off on Is frustrated Washington planning a new false flag operation?

It seems like it’s time again. Washington will once more try to prove to the world that it matters in Syria by striking Syrian government forces. We’re all too familiar by now on how this works; First, jihadists get cornered as Syrian government forces declare their intention to launch an offensive on their strongholds. Second, Washington warns Syria and her allies about the use of chemical weapons and its consequences as Washington expresses its frustration with the international community and its “failure to act”. Third, despite all eyes of the international community on them and Washington’s harsh warnings, Russia, Syria and Iran together choose to a launch a single chemical weapons attack, mostly targeting civilians since clearly there is no abundance of military targets otherwise. And finally Washington together with its faithful and chivalrous allies step in to save the day by bombing random locations and then calling it a strike for “human dignity”.

This time all eyes are on Idlib, the final jihadist bastion in Syria. The scenario is the same as offensives before, the Syrian Army has the jihadists surrounded from nearly all sides as they stand outmanned and outgunned in the face of overwhelming odds. Conveniently, National security adviser John Bolton, out of nowhere warns Syria and her allies that Washington would “respond very strongly” if Assad uses chemical weapons in Idlib. This is very similar to Washington’s theatrics back in March/April, when the Syrian Army was liberating occupied Ghouta.

First, Washington “warned” the Syrian government not to use chemical weapons in East Ghouta. Then when the offensive had kicked off, Washington and its media cohorts launched a propaganda campaign, replaying footage allegedly captured inside Ghouta that showed “Assad’s victims dying a painful death”. Of course, Washington called for several UNSC meetings and resolutions on Syria, “condemning Russia, Syria and Iran”, but to no avail. Finally, Washington had to show its true nature when, represented by ambassador Nikki Haley, Washington declared that it would unanimously act against Syria if the UNSC failed to do so.

Now, the set was staged for another act of terrorism against a sovereign nation. All Washington needed now was an excuse powerful enough to justify the aggression on Syria for the people at home. This is where the Syrian government conveniently gives Washington the perfect opportunity. Out of nowhere, Damascus went insane and chooses to launch a chemical weapons attack, killing mostly civilians. Washington now had its excuse to attack and the rest is history. Of course, the so called international community wont bother to do any investigation when it comes to Washington and dubious claims.

What does Washington hope to achieve?

The last time Washington embarked on a “world saving mission”, not much changed on the ground. By now it is too late to save what is left of the jihadists, the Syrian government has reclaimed too much territory for the outcome of the war to reverse.
Surely Washington is aware of this so there must be another reason for these false flag operations. One clue could perhaps be found in John Bolton’s statements last week when he claimed that Washington had an opportunity in terms of negotiations since Russia is “stuck” in Syria. This statement comes only a month after reports of US officers arriving at the Mezzeh military airport in Damascus for talks with Syrian government representatives.

According to the report, Washington representatives met with Brigadier General Ali Mamlouk, the head of Syria’s national intelligence bureau to discuss a possible US withdrawal from Syria, including the military facilities at Al-Tanf and the Eastern Euphrates, in return for a couple of Washington’s demands. These included the withdrawal of Iranian troops in southern Syria, granting US oil companies a share in Syria’s north-eastern oilfields and all gathered intelligence and data on terrorists killed and arrested over the past 7 years. Ali Mamlouk reportedly rejected the offer, citing the same answer as the Syrian government has been repeating for years; no cooperation unless formal channels are used.

With this information at hand, one can deduce that Washington’s recent threats is a reaction to the outcome of this reported meeting. Faced with the realities on the ground, Washington must quickly act to save face.

Any situation where Moscow and Tehran get to dictate terms for a favourable outcome of the war is a catastrophe for Washington and its cohorts. In my last piece, I explained that several US-backed SDF commanders were contemplating reconciliation with the Syrian government, if this happened it would strip Washington of its last piece of influence in Syria.

So, realizing that the war might end soon enough, and being left out of both peace negotiations and the lucrative post-war reconstruction contracts between Syria and her allies, Washington could be trying to force through negotiations on it’s own terms, one with favourable outcome. This is to be done by bombing the Syrian Army as a form of punishment for Syria’s insolence, and pressuring Moscow to think it is “stuck” in Syria, having to always protect Damascus from Washington’s terror. I believe the recent surge in military activity in eastern Syria is Washington’s way of making sure that Damascus doesn’t try to liberate eastern Syria by force. This would fit well with the aforementioned theory that Washington is trying to force its way into the negotiations.

This could only work for as long as Washington commands its proxies – the SDF. As long as the SDF serves Washington, the long overdue stay of US troops will continue under the disguise of “fighting ISIS”. Washington has made clear that it wants a way out of Syria, but not without getting something in return, after all the 7 year long war has been a costly and embarrassing bet on the wrong horse, so to speak. The next few days or weeks will see the situation unfold as the Syrian Army is about to kick off this long-awaited offensive, whether or not Washington will launch another false flag operation remains to be seen. As local resistance to Washington’s occupation keeps growing, and with the SDF contemplating reconciliation, Washington should understand that; A – Iran will never be forced out of Syria by the U.S., and B – Syria will never accept U.S occupation despite all their threats.

Previous: August 28, 2018: US Creates Strike Force To Attack Syria
Next: American hysterics at the meeting of Bolton and Patrushev (Ruslan Ostashko)