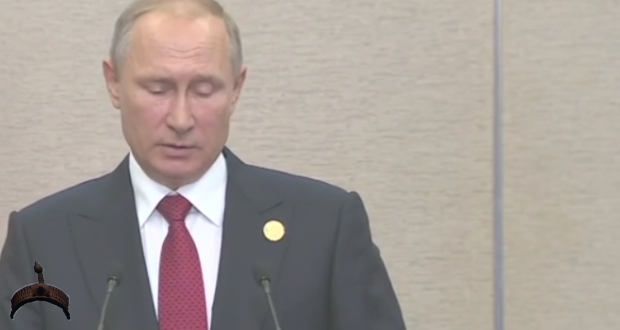 Posted by: BalogunAdesina in World News Comments Off on Will Putin’s Policy of Concession Succeed?

Russian president Vladimir Putin’s speech at the St. Petersburg International Economic Conference last weekend shows the Russian government’s ensnarement by neoliberal economic policy. Putin defended globalism and free trade, and he warned that crisis will result from the breakup of the global system.

Neoliberal economics produces domestic economic crisis, because it diverts employment in high-productivity, high-value added activities, such as manufacturing and tradeable professional skills such as software engineering, from developed economies, such as the US, UK, and Europe, to economies where wages are much lower. Neoliberal economics is also the basis for financialization, which diverts the economic surplus from real investment into debt service. Together these devastating impacts of neoliberal economics kill economic growth. Just look at the no-growth experience of the Western world in the 21st century, where growth has been limited to the prices of financial assets while well-paid employment disappears.

The problem is not only that neoliberal economics is a device for financialization and the ruination of populations for the benefit of oligarchs and global corporations. The larger problem is that The Russian government’s belief in neoliberal economics makes Russia impotent to withstand pressure from Washington. Russia cannot stand up to Washington or even to Israel, because the government believes that Russia’s economic success depends upon being integrated into the Western economic system. To keep the door open, Russia continually accepts provocations which encourages more provocations.

There are situations in which this is statesmanlike and commendable, but not this situation because the crisis goes beyond economics. Putin’s prudent diplomacy is perceived in Washington as weakness. The neoconservatives who control the US government are committed to US hegemony. They are already over-filled with hubris. Each time they witness Putin back away, they become more confident that they can with more pressure force Russia into submission.

For example, the neoconservatives read Putin’s standdown in the face of Trump’s missile attack on Syria, an attack based on an obvious fake news event, as a lack of nerve. Putin’s acceptance of Washington’s attack was very damaging to Russia’s credibility with Washington’s neoconservatives. What they saw was Putin accepting an attack on an ally to whose defense Russia had committed armed forces. What is the point of clearing Syria of American supported jihadists and then allowing Washington and Israel to attack Syria?

I have explained Putin’s standdown as his gamble that Washington’s aggression could break apart Washington’s European empire as long as Russia does not exercise force in a way that would scare the Europeans. In other words, Putin is behaving carefully, not rashly. This is admirable, especially as Putin has superweapons against which the West has no defense.

My concern is what happens if Putin’s bet doesn’t pay off, and the effect of Putin’s restraint is to convince the neoconservatives that Russia can be bullied into submission. I do not think Russia can be bullied into submission, but the neoconservatives will have Russia in a corner where Russia has to fight or surrender. Russia will fight, and it will be the end of us all.

In other words, if Putin’s admirable strategy fails, the neoconservatives, who are already more full of hubris than was Hitler when he sent the Wehrmacht marching off into Russia, will push Russia to the point of war.

Therefore, I have suggested a different strategy: that Putin put his foot down. For example, he could stop accommodating US and Israeli attacks on Syria. These attacks are illegal under international law. They are the actions of war criminals under the Nuremberg Standard established by the US itself. Putin could supply Syria with the S-300 missile defense system, but at the request of Washington and Israel Putin has not fulfilled the contract, another example to the neoconservatives of Putin’s lack of nerve, a misreading that encourages Washington in its provocations.

A foot-down strategy carries the risk of scaring the Europeans about Russian aggressiveness, which is the way the presstitute Western media would report it. However, this strategy does not carry the risk of convincing hubristic neoconservatives that Putin is a pussy. The effect on Washington could be positive and push Washington back to the time when the US was respectful of the Soviet Union. The effect on Europe could be to make Europe aware that the conflict that Washington is initiating is what threatens Europe, not a threat from Russia.

The evidence is clear that the neoconservatives are discounting Russia as nothing more than a short-term obstacle to US world hegemony. Let’s attempt to weigh some of the evidence in behalf of Putin’s diplomatic strategy. French President Macron, Washington’s puppet, who has French troops in the US-occupied part of Syria, is toasted by RT for going to the St. Petersburg International Economic Forum with the mission of “keeping Russia in the European family.” https://www.rt.com/news/427820-putin-macron-russia-europe/

Is Macron, who has French troops in Washington-occupied Syria, breaking with Washington, or is Macron playing Putin along by encouraging Putin in his belief that Europe will break from Washington and welcome Russia into the “common European home,” thus encouraging more concessions from Putin.

Is the Russian government being deluded into making more concessions and accepting more requests that serve the agenda of Washington and Israel instead of Russia and her allies? Washington’s latest request is that Putin encourage Iran to withdraw its military contingents from Syria. Putin did as requested, but Iran refused on the grounds that, unlike the US, France, and Washington’s mercenary jihadists, Iran is in Syria at Syria’s requests. The result is that Washington and Israel, both of which continue to attack Syria, have succeeded in creating tensions between Russia and Iran. http://tass.com/pressreview/1005664

To avoid a rift with a necessary ally, Putin might instead have told Washington that Russia and Iran would withdraw after Washington removes the forces it has placed in Syria. Washington was quick to take advantage of the rift and has informed Putin that Washington does not approve of Russia fulfilling the contract to deliver jet fighters and the S-300 air defense system to Iran. If Putin accommodates this Washington request as well, it will make it much easier for the US and Israel to attack Iran.

Washington has won again. Dispute between Russia and Iran leaves Iran more vulnerable to a US military attack, an attack that a number of commentators see in the works. If Iran is destabilized, the easier to destabilize Russia.

What did Putin get out of again acquiescing to Washington? More threats to Syria from Washington and Israel. On May 28 Washington informed the Syrian government that if it attempts to clear Daraa of foreign invaders who are occupying, with Washington’s support, Syrian territory, Syria will receive a “firm response” from Washington. https://sputniknews.com/middleeast/201805261064839163-syria-leaflets-reaction-daraa-ceasefire/ Israel informed Syria
that Syria is not permitted to use its air defenses to protect its territory against Israeli aircraft operating within Syrian territory. https://sptnkne.ws/hAhP

In other words, Washington and Israel have rewarded Putin’s concession by forbidding Syria to defend itself.

The neoconservative Washington regime is confident that it has Putin locked into the backdown mode and will even be able to negotiate Russia’s withdrawal from Syria. If that occurs, Washington will restart the war to overthrow the Syrian government.

With Russia on the run, Putin can expect a Washington-ordered Ukrainian attack on the breakaway Russian republics that Russia has left hanging and also Washington-organized ISIS attacks on Russia through the former Soviet central Asian republics. https://www.paulcraigroberts.org/2018/05/24/putins-peace-efforts-coming-naught/ The Ukrainian attack could occur during the World Cup when the Russian government will be focused on the prestige of hosting the World Cup and not on its foreign policy.

When Russia is incorporated into the Western economy, it will be as a vassal state.

But for now Russia is celebrating, pointing to the large attendance at the St Petersburg Forum, including that of the French president, as evidence that Russia is not isolated and is hoping for another prestige gain from the World Cup.

Perhaps someone in the Russian government will remember that it was its focus on the Sochi Olympics that delivered Ukraine into Washington’s hands.