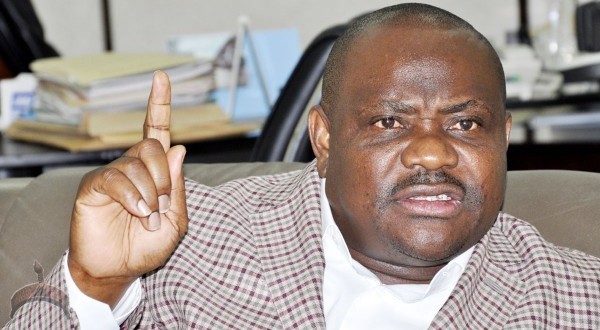 Posted by: chucks in Local News, Politics Comments Off on Alleged Oyigbo killings to divert attention from IPOB’s crime – Wike

The Rivers State Governor, Nyesom Wike, has described the allegation that he ordered the army to kill Igbo people in Oyigbo as a “politically-motivated falsehood.”

Wike, in a television programme on Monday in Port Harcourt, said the curfew was imposed to restore calm after IPOB’s attack.

He said, “The narrative that the Igbo were being killed by the military was intended to shift attention from the despicable activities of IPOB in Oyigbo.”

The governor also lamented IPOB’s effrontery to rename a local government in the state and hoist its flag in a public school in Komkom town.

Wike said the state government had no regret against its stance on IPOB, which he said, had already been designated a terrorist organisation by the Federal Government.

According to him, even the South-East governors had never supported the group and wondered why a governor from the Niger-Delta should tolerate it.

He revealed that security agencies, during a search of some residents in Oyigbo, saw shrines with IPOB flags and Nnamdi Kanu’s photographs.

Wike maintained that if IPOB was allowed to operate from Oyigbo, they would soon overrun the state.

Meanwhile, some residents of Oyigbo in Rivers State and the joint security team deployed to maintain peace in the area are on a collision course over claims of harassment in the community.

The joint security operation, comprising the military and the police, started when the Rivers State Governor, Nyesom Wike, imposed a 24-hour curfew on Oyigbo and reinforced the ban on the activities of members of the Indigenous Peoples of Biafra.

Residents, however, accused the security operatives of breaking into people’s homes and shooting indiscriminately, among others.

Some residents, who called a radio station, 92.3 Nigeria Info, in Port Harcourt on Monday, said youths were prime targets.

A man said, “The soldiers are breaking into peoples’ houses and harassing anyone they see along the road, especially if the person is a youth.

“Yesterday (Sunday) a man was hit by a stray bullet near Timber area where I live. The man has died now.”

Some also said they were unable to access food and other basic items.

Previous: ASUU strike on N3tn agreement by past govt –Minister
Next: FG clamps down on #EndSARS promoters, freezes accounts

Excerpts from Seun Okin’s interview with the Rivers State Governor, Nyesom Ezenwo Wike on #PoliticsToday Seun Okin: Let me first and foremost get your reaction to your friend, Peter Obi. His departure from your Party, he is dumped your Party, how does that come to you? Wike: It’s not surprising to me and that’s what I have always said when I go round and say you have to be careful. Those of us who have joined the Party since 1998, we ...