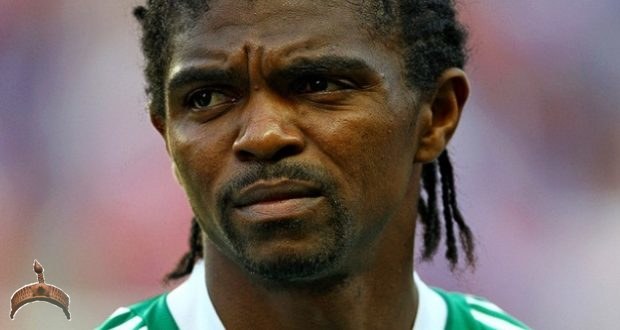 Nwankwo Kanu To Contest For President Of Nigeria

Posted by: Lolade in Breaking News, Politics Comments Off on Nwankwo Kanu To Contest For President Of Nigeria

Inspired by George Weah’s feat, the two-time African Player of the Year will contest and has vowed to boost his country’s standard of living. Former Nigeria international Nwankwo Kanu has announced he’ll run for president of Nigeria in 2019.
Kanu, who once played for Ajax, Inter Milan, and Arsenal during his active days, said he’d the dream to transform probably the most populous african nation.
The 1995 Champions League winner hasn’t hidden his passion for politics after ending his professional career at Portsmouth in 2012.

While announcing his intention to contest for president, Weah – the 1996 and 1999 African Player of the Year – addressed numerous his supporters.

“My presence here today is about the future of our country and the happiness of our people,” the 41-year-old said.
“The last 18 years of leadership has witnessed a decline in all critical sectors of life in Nigeria, plus general insecurity in the land.
“Also, I’ll do all it takes to wrestle corruption which has become blatant and widespread. The rest of the world looks at Nigeria as the home of corruption.
“If I get your mandate, I promise to do things differently and restore honour and integrity to public service by keeping the best and attracting the best.
“George Weah’s victory in Liberia is a pointer that this dream is very realistic with you all on my side.”
Kanu will be hoping to become Nigeria’s fifth president in the fourth Nigerian Republic by unseating incumbent president Muhammadu Buhari.
Happy April 1st

Previous: Anthony Joshua pictured with Gov. Ibikunle Amosun
Next: I’ve a gay friend, How Can I Tell Him To Stop?