Don't Miss
Home / Naija Gist / Metro life / Are These The Nigerians That Own The Private Jet That Was Seized In The US? 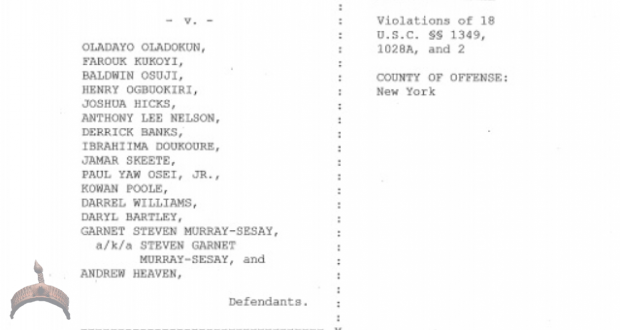 Are These The Nigerians That Own The Private Jet That Was Seized In The US?

Posted by: Lolade in Metro life Comments Off on Are These The Nigerians That Own The Private Jet That Was Seized In The US?

It was announced yesterday that a private jet belonging to a Nigerian was seized in the United States. It was also announced that the owner of the jet was arraigned in court in New York on Tuesday. It is alleged that the owner is involved in a multi-million dollar fraud.

Since then many people have speculated that the jet belongs to Allen Onyema, the owner of Air Peace. However, we know that Allen Onyema is in Nigeria and we also know that he was not arraigned in court in New York on Tuesday, so he is definitely not the owner of the plane.

So, the question is, who was the Nigerian that was accused of engaging in fraud and that was arraigned in court in New York on Tuesday?

Here is the answer.

4 Nigerians, 11 others charged in New York with $18m fraud

US Department of Justice: unseals the complaints against the Nigerians and 11 others

At least four Nigerians were among the 15 defendants charged In Manhattan Federal Court on Tuesday for $18 Million fraud.

They were charged with conspiracy to commit wire fraud and bank fraud.

One defendant is in state custody and will be presented at a later date. Ten defendants remain at large.

U.S. Attorney Geoffrey S. Berman said: “As alleged, these defendants conspired to steal millions of dollars by stealing identities, opening fictitious bank accounts, and depositing stolen checks – or conning victims to wire funds – into those accounts. All told, as alleged, the scheme netted more than $18 million and victimized numerous individuals and businesses. Thanks to the combined efforts of our law enforcement partners, the game is up.”

As alleged in the criminal Complaint:

To date, law enforcement has identified more than 100 fraudulent transactions in furtherance of the scheme, totaling more than $18 million.