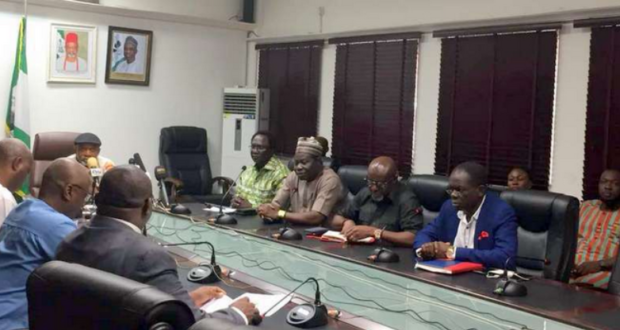 Minimum Wage; Meeting Between Labour And FG Ends In Stalemate.

Posted by: Lolade in Local News Comments Off on Minimum Wage; Meeting Between Labour And FG Ends In Stalemate.

The meeting of the committee set up to reach an agreement on a new national minimum wage has ended in stalemate.

However, this end is only temporary, as the committee is set to reconvene at 10pm.

Briefing journalists at the end of a marathon meeting of the committee in Abuja, Ama pepple, the Chairman of the committee and former Head of Service of the Federation, said two figures — N24,000 proposed by the government and the N30,000 demanded by the organised labour — presented as the new national minimum wage, but no decision was reached.

She said when the committee appealed to the organized labour to call off the strike, they promised to consult and revert when the meeting reconvenes at 10pm.

But the Minister of Labour and Employment, Chris Ngige, said the meeting at 10pm was meant to get appointment on when the report will be submitted to the President.

Previous: Fayose Abandoned Us For Years – Warm Springs Resort Manager Tells Gov Fayemi During Inspection
Next: Photo: How Too Much Farting Has Ruined my Love Life – Woman Reveals