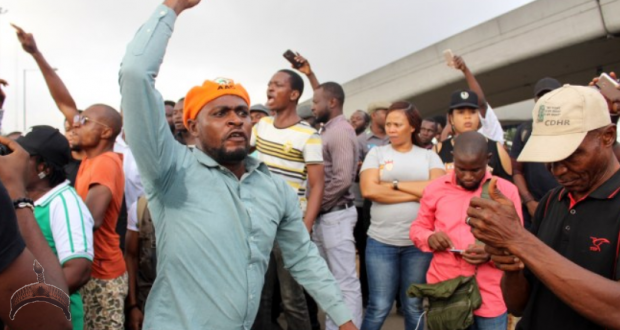 …Wants North to break all alliances with the Yoruba

ABUJA: A northern group, Coalition of Northern Groups, CNG, has accused the Southwest region of Nigeria of conspiring to overthrow President Muhammadu Buhari’s government with the #RevolutionNow protest.

The group said the North will not be part of any international conspiracy supported by South Westerners to destabilize the country.

While it specifically accused the Southwest of being in the forefront of agitations to overthrow the Muhammadu Buhari administration in spite of being the “greatest beneficiary” of the same administration, the northern coalition called for an end to all alliances with the Southwest.

According to the group, “It is quite unfortunate that the South West which has been the single major beneficiary of the Buhari administration should also be in the forefront of efforts to discredit and bring him down by all means. This can be seen in the manner in which the bulk of political, cultural, religious and traditional leadership is standing solidly against the government with its open support for call for the violent overthrow of the Buhari government by the #Revolutionow organizers.

“In particular, such individual beneficiaries of the government and others largely from the South West were nowhere to be seen when their people and the southern-based media ignited tensions over the government’s Ruga initiative.

“These same beneficiaries appear today in implicit support of the proposed insurrection by maintaining a conspiratorial neutrality while other southern influencers…explicitly backed the organizers”, the northern coalition stated.

“We also wish to ask the president if in all honesty he still considers the South Western players as true friends who are genuinely desirous of his success. He should ask himself if the treatment he is receiving from them is worth the attention he had given the South West which involved colliding with his northern brethren to the point of elevating the status of June 12 as appeasement.

“To the entire northern leaders and elite, we categorically say that the current political alignment with the South West is not paying and it never will.”

The coalition was however quick to concede that the President Muhammadu Buhari administration has not lived up to expectations and should, as a matter of urgency, apologize to the nation.

“We submit that instead of just sitting back to thank Nigerians for not joining the overthrow plan, President Buhari should rather sincerely apologize to the nation by reflecting on how he dragged the country into such a desperate situation, own up to his inadequacies and take genuine steps to address the mounting national grievances.

Unless this is done, with the growing angry mood that pervades the entire country, the likelihood of a more serious dissent remains imminent”, the coalition warned.

Previous: Thought-provoking: Nigerians in the Diaspora…
Next: Davido Eats 24karat Gold Meat as he Meets Chef Nusret In Greece.