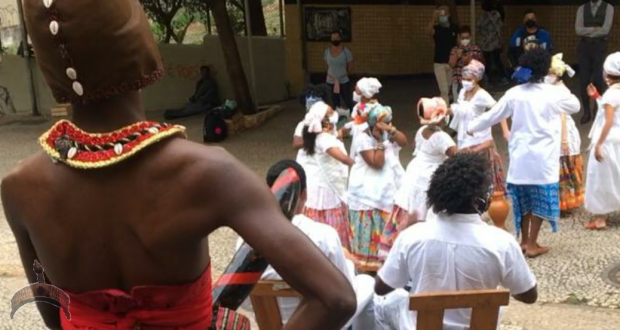 The Oodua tradition took a drastic evolution this weekend in Brazil , Candomblé traditionalists , the devotees of Brazil’s version of the Oodua tradition invoked the presence of Esu at the crossroads of Anhangábau, Saopaulo, Brazil.

The Oodua messenger deity was appeased in broad daylight, and was sent to convey all important messages to the living God, Olodumare , the Almighty God of the heavens.

The scenario which was an artistic representation of Esu Laa’roye gathered hundreds of Brazilians at the valley in Anhangábau, the metropolitan city of Saopaulo, Brazil.

The traditionalists danced , sang praises and preached the words according to the teachings of Orunmila-Ifa , the divine link between Olodumare and mankind .

The spiritual leader, Babalorixá Joao de Oya, said that Brazil must continue to elevate the Orisas in their lands , he said that the Oodua tradition is a blessing to Brazil and onto mankind from Olodumare in the heavens.

He said that the Pandemic tragedy attacked Brazil to this extent because Brazil did not do the.needful at the right time , he said that the  country believed in the white man’s solution instead of carrying the necessary Ebo ( sacrifices).

He cited the efforts of some Brazilian traditionalists who finally acknowledged the importance of Obatala and did the needful , he said that Brazil is getting better now because the traditionalists are carrying the needed sacrifices.

In a ritual ceremony which started with the chantings of Oriki Esu in Oodua language by Baba Olorisa, the spiritual leader of the traditional groove in Cotia, Saopaulo, said that the intention is to remind the Brazilians in the city of Saopaulo that Esu is ready to convey their messages to Olodumare when properly appeased.

Brazil , according to many is the Africa out of Africa , a land where ritual sacrifices are offered every blessed day to the gods . The Babalorisa however said that the Oodua (Yoruba) Esu is not the biblical Devil, he cited the good deeds that  Esu did in his life and the lives of many.

He said that Esu is a messenger ready to convey messages to Olodumare . The ceremony also marked the presence of Goddess Osun and other deities , they were acknowledged with dances, prayers and honors.

Previous: 10 Things You Must Know About Ìtefá
Next: ‘What we have now is not a Nation’ – Professor Wole Soyinka on Sunday Igboho’s House raid by the DSS

Why did you quit your good job to serve ‘Esu’? #EsuIsNotSatan

Discussion on Esu continues. An employed graduate, a Christian, asked his friend, also a graduate but a Babalawo, “why did you quit your good job to serve ‘Esu’ “? The Babalawo answered, ” I get comfort and goodness from ‘Esu’. The banker, the employed, said, “you must be stupid to do that in this century “.Years later, the banker lost his job and was thrown out by his landlord. He rushed to the Babalawo who now owns a house with ...