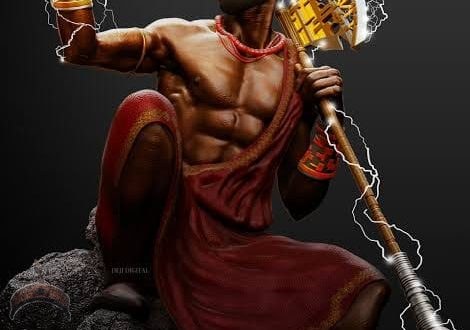 Posted by: ayangalu in Breaking News, Culture Comments Off on Sango: The 3rd King of Oyo Kingdom

Sango was a royal ancestor of Oodua. He was the third king of the Oyo Kingdom. He succeeded Ajaka, son of Oranmiyan. His symbol is a double-headed axe, which represents swift and balanced justice.

Mythologically, he (and 14 others) burst forth from Yemaja’s body after her son, Orungan, attempted to rape her for the second time. In another set of stories, Sango is the son of Aganju and Obatala. As the story goes, Obatala, the king of the white cloth was traveling and had to cross a river. Aganju, the ferryman and Orisa of fire, refused him passage so Obatala retreated and turned into a woman and traded his/her body for passage (this would later become a conspiracy theory about homosexuality existing even in the days of old).

This tension between reason represented by Obatala and Aganju would form the foundation of Sango’s particular character and nature. Sango was said to have gone in search of Aganju on which he had to throw himself into a lake of burning fire to prove his lineage.

During the reign of Alaafin Ajaka, Oyo Empire was under a regular threat of war from Olowu, Ajaka’s cousin; who rules the Owu Kingdom. Olowu later sent his warriors to capture Alaafin Ajaka and bring him to Owu. In their bid to rescue Alaafin Ajaka, the Oyomesi sent for Sango.

Sango, after the rescue of Ajaka, was crowned King while Alaafin Ajaka was sent into exile. During his reign, he had two generals: Timi Agbale Olofa-ina who could shoot arrows of fire, and Gbonka who was equally powerful.

Seeing how powerful these two generals grew, Sango followed Oya’s advice to get rid of them and sent them to govern the border towns. Timi left for Ede but Gbonka stayed back in Oyo to pose further treat and in his quest to destroy them both, Sango sent Gbonka to capture Timi.
Sango who believed that the fight between Timi and Gbonka in Ede was staged asked for a re-match in Oyo and Gbonka defeated Timi. Seeing as he couldn’t finish his two threats at once, Sango ordered that Gbonka should leave the town.
Babalawo Ifajumo Awoniyi….