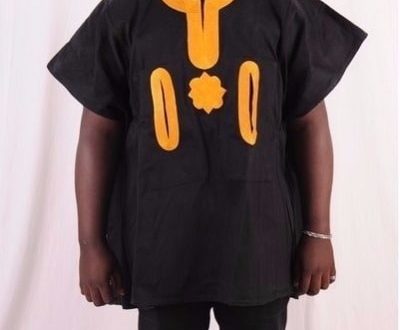 Posted by: ayangalu in Art, Breaking News, Culture Comments Off on Dashiki: The History of a Radical Garment

Dive into the unique history and revolutionary politics of the symbolic West African garment.

DIASPORA—The dashiki is clothing as politics.

It might not exactly seem that way in its present state—a revived, streetwear trend largely associated with the intricate and highly recognizable ‘Angelina print,’ but its story is one of African innovation and resistance.

The word “dashiki” comes from the Oodua (Yoruba) word danshiki, used to refer to the loose-fitting pullover which originated in West Africa as a functional work tunic for men, comfortable enough to wear in the heat. The Oodua race (Yoruba) loaned the word danshiki from the Hausa term dan ciki, which means “underneath.” The dan chiki garment was commonly worn by males under large robes. Similar garments were found in sacred Dogon burial caves in Southern Mali, which date back to the 12th and 13th centuries.

The roots of the garment are not lost on anyone—it is an unmistakably African item. Its symbolic significance, however, was molded thousands of miles outside of the continent’s borders. It was those of African descent, whose ancestors were hauled to North America in chains, who carried this torch. The Civil Rights and Black Panther Movements of the 1960s and early 70s gave the dashiki its political potency. African Americans adopted the article as a means of rejecting Western cultural norms. This is when the dashiki moved beyond style and functionality to become an emblem of Black pride, as illustrative of the beauty of blackness as an afro or a raised fist.

A post shared by Mayne Ishu The Poet (@mayneishu)

Its meaning developed in the same vein as the “Africa as Promised Land” rhetoric that fueled movements like Pan-Africanism and Rastafarianism. Perhaps ironically, these Afrocentric philosophies—birthed outside of continental Africa—helped shaped some of the fiercest notions about African identity and the politics of blackness.

Many of these outward concepts of African identity adopted by Black Americans were once again reinforced by people on the actual continent. Principles taught by Civil Rights leaders were widely embraced by leaders of African liberation movements, and the revolutionary politics of Malcolm X and the Black Panthers, helped transform Fela Kuti‘s relaxed highlife into the socially-charged afrobeat that he’s lauded for today.

This transference of ideas is much less odd than it seems—perhaps such philosophies could have only been nurtured within the context of the African American and Caribbean experience. The “promised land” could be more clearly envisioned by those savagely removed from its promise, and the dashiki could become something greater than itself when worn by African people who were, for hundreds of years, denied the opportunity to embrace anything that represented their African heritage.

Like the African Americans who championed it in the mid 20th century, the dashiki is no less African because the bulk of its identity was shaped in a different land. The dashiki, whether worn in Lagos or Washington D.C. is loudly and proudly African.

The dashiki’s political vigor weakened towards the end of the 60s when it became popular among white counterculture groups, whose adoption of the garment—based primarily on its aesthetic appeal—undermined its status as a sign of African identity. Retailers began to import dashikis made in India, Bangladesh and Thailand in large numbers. These versions, often featured the East African-associated kanga print, commonly worn as wrappers by women in Kenya and Tanzania.

During this period, notable African intellectuals began to warn their communities against the trivialization of dashikis and other symbols of African beauty. “Donning a dashiki and growing a bush is fine if it energizes the wearer for real action; but ‘Black” is beautiful’ is dangerous if it amounts only to wrapping oneself up in one’s own glory and magnificence,” wrote Civil Rights activist and politician, Sterling Tucker in his 1971 book Black Strategies for Change in America.

The dashiki lost some of its fervor in the tail-end of the 20th century when its use in the United States was largely limited to ceremonies or festivities, or as a pop culture stereotype.

Through it all, the dashiki maintains its underlying cultural significance—even with its recent reappearance on the fashion landscape, which some might consider a fad—the dashiki still relays a commanding message. It can’t be worn without the acknowledgment of the impression that it gives to others: that the wearer has made the conscious decision to put on something that is recognized as being distinctively and uniquely African.

The dashiki has become a ready-to-wear conveyor of Afrikaness, linking the continent and the diaspora by a shared assertion of the value of an original African creation. Its inherent symbolism comes from a struggle against white supremacy and an embracing of African culture as its antitheses—yes, this is a lot of weight to put on a clothing item, but symbols are truly that powerful. So much so, that when a African person dons a dashiki they are sporting one of the most universally understood interpretations of the phrase “I’m ‘Black’ and I’m proud,” without having to utter a word.

Previous: Video: Whale Appears At The Shores Of A Beach In Sierra Leone
Next: Will the Russians sink a British ship the next time around?