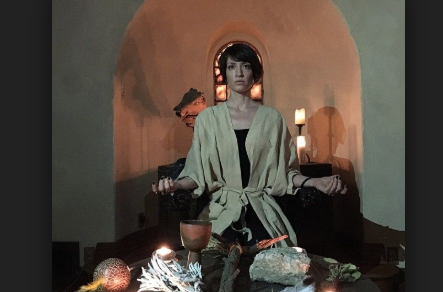 Posted by: Lolade in Foreign Comments Off on Witch Who Cast Spell On Trump Claims She’s 300 Years Old.

A witch who cast a hex on Donald Trump and claimed she is 300-years-old has now revealed her spell for finding true love. Amanda Yates, head of a coven in Los Angeles, leads rituals at lavish locations across the city including the Museum of Contemporary Art.

Known as the ‘Oracle of Los Angeles’ she charges as much as £77 ($100) per hour for her sessions including chakra balancing and grounding sessions, which aim to relieve stress.

She has garnered a huge following of her fellow witches and celebs alike, she is set to appear on the US hit TV show, Vanderpump Rules.

But reflecting on her love spell, she still sounds amazed at its success rate, revealing it helped her find her husband; whom she has now divorced.

Speaking to The Times, Yates, actually 35, said she “would never do a spell to harm someone”, but the power can be used to intervene in difficult situations.

In a bid to remove Trump from office and stop “him from doing such horrible, harmful things”, she found a horrific photo of Trump.

Then she recited a ritual, and set fire to the snap with an orange candle.

Now witches around the world continue to cast “binding spells” on Trump.

The latest took place ahead of the US midterm elections, with Dakota Bracciale and her fellow witches gathered at the mystical boutique Catland Books in Brooklyn on November 3.

They aimed to “undo all the harm that these people have tried to do”.

As well as casting spells on the controversial US President, Vicky said huge numbers of people are turning to witchcraft and black magic to help them deal with everything from boosting their love life – to cursing or exacting revenge on their enemies.