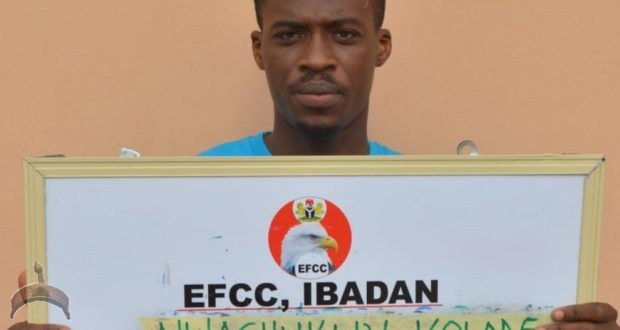 The Ibadan Zonal Office of the Economic and Financial Crimes Commission, EFCC, has secured the conviction of nine internet fraudsters, before two different judges of the Federal High Court, Abeokuta, the Ogun State capital.

The latest of the convictions, involved Toheeb Abdulrasheed and Chukwuebuka Isaac Dike, who were sentenced by Justice Mohammed Abubakar of the Federal High Court, Abeokuta, Ogun State on Monday, June 8, 2020 for their involvement in internet-related fraud.

Dike, who claimed to be a 100-level Biochemistry student of Federal University of Agriculture, FUNAAB, was sentenced to three months in prison; while Abdulrasheed, a self-acclaimed graduate of Business Administration from Moshood Abiola Polytechnic, MAPOLY, bagged four months.

Their sentences followed the prayer of prosecution counsel, Abdulrasheed Suleiman for their conviction after they pleaded guilty to their respective amended one-count charge.

Dike on the other hand,   was ordered to  restitute the sum of $500USD (Five Hundred United States Dollars) to his victim and ceded his Gold iPhone 11 Pro Max and Rose Gold Infinix Hot 5 to the Federal Government.

Back to Tuesday, June 2, 2020, Justice Ibrahim Watilat of the same Federal High Court, Abeokuta convicted and sentenced the trio of Tobiloba Oni, Paul Oluwadamilare Odole and Michael Oluwaseun Jemiseye having found them guilty of the criminal charges preferred against them by the Ibadan Zonal Office of the Commission.

Apart from forfeiting all items recovered from them to the Federal Government, the convicts were mandated to sign a pact with the EFCC to be of good behaviour and never to be involved in any form of economic and financial crime within or outside the country.

and moreover, to always make themselves available for participation in subsequent anti-corruption campaigns of the Commission.

Justice Watilat in the same vein, convicted three additional others for internet-related crimes.

The convicts: Favour Chinueze Ekeh, Kolade Nwachukwu and Sultan Adeniji Egbede were handed three months imprisonment each with N100,000, N50,000 and N100,000 option of fine, respectively, which must be paid within two days of the sentence or else, the prison term would apply.

He was sentenced to six months imprisonment with effect from March 6 when he was arrested. Aside the jail term, he forfeited all items recovered from him to the Federal Government.

Apart from Suleiman, other prosecution counsels involved in the convictions include: Tunde Sonoiki, Oyelakin Oyediran and Bashir Shamsuddeen.