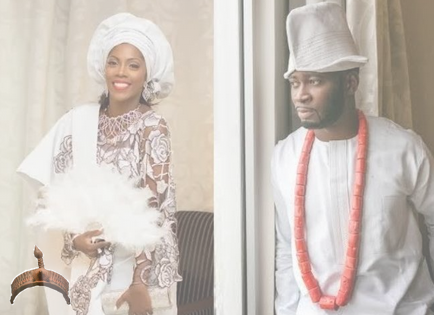 Tiwa Salvage is wrong according to Yoruba Customary Marriage Act.

Written by Grandson Soyemi.
Tiwa Salvage says she will always allow her estranged husband to have access to their son. As a Yoruba woman, she is totally in the wrong here. This is more so because the Yoruba people have three phases of marriage: the Introduction, the Engagement and the Registry, Church or Mosque Ceremony.

The most significant of the three stages is the engagement proper which is often conducted under the Yoruba Cutomary Marriage Act.
The Act states that the children of the union between a husband and a wife belong to the father and if the father dies, the children belong to his immediate family. Tiwa’s husband has all the rights over their child, according to the Yoruba culture and tradition, which are laws in Yorubaland.

However, this tradition is not the same as those of the White in America or the English from the United Kingdom, where more often than not it is the wife who has the custody of the children. In Yorubaland, it is the father who has the custody. Tiwa, therefore has no right whatsoever over the child of her union with the husband. She is in Lagos, Yorubaland and not in New York or London.
I have done this post to educate the gullible Yoruba Youth who may have watched Tiwa’s video. On reflection, I am, however disturbed on the mores and mishaps that increasingly afflict love and marriage among young Yorubas.

Our society expects us all to get married. With only rare exceptions, we all do just that. Getting married is a rather complicated business. It involves mastering certain complex hustling and courtship games, the rituals and the ceremonies that celebrate the act of marriage, and finally the difficult requirements of domestic life with a husband or wife. It is an enormously elaborate round of activities, much more so than finding a job, and yet while many resolutely remain unemployed, few remain unmarried.

Now all this would not be particularly remarkable if there were no question about the advantages, the joys, and the rewards of married life, but most Yoruba, even young Yoruba, know or have heard that marriage is a hazardous affair.
Of course, for all the increase in divorce, there are still young marriages that work, unions made by young men and women intelligent or fortunate enough to find the kind of mates they want, who know that they want children and how to love them when they come, or who find the artful blend between giving and receiving.

It is not these marriages that concern us here, and that is not the trend in Yoruba today. We are concerned with the increasing number of others who, with mixed intentions and varied illusions, grope or fling themselves into marital disaster. They talk solemnly and sincerely about working to make their marriage succeed, but they are very aware of the countless marriages they have seen fail.
But young people in particular do not seem to be able to relate the awesome divorce statistics to the probability of failure of their own marriage. And they rush into it, in increasing numbers, without any clear idea of the reality that underlies the myth.
I can only hope Tiwa and her husband find the grace to work things out on their own.

Previous: What is the meaning of Owo ? (Must Read)
Next: Iwure Owuro Ipari Osu