Don't Miss
Home / Naija Gist / Metro life / U.S, The mastermind behind Xenophobic attacks designed against Nigerians in South Africa as the good Samaritan who helped the victims get charged for money laundering ? 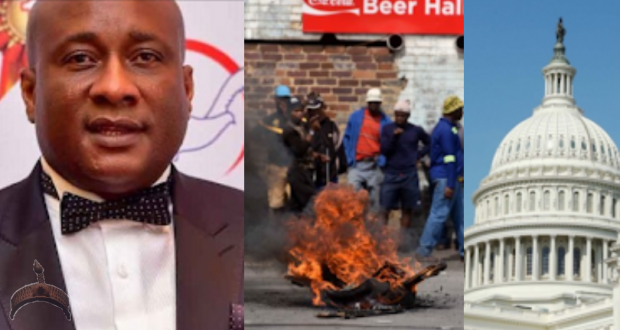 U.S, The mastermind behind Xenophobic attacks designed against Nigerians in South Africa as the good Samaritan who helped the victims get charged for money laundering ?

Posted by: LolaJQDybu in Metro life Comments Off on U.S, The mastermind behind Xenophobic attacks designed against Nigerians in South Africa as the good Samaritan who helped the victims get charged for money laundering ?

An Ooduan is lost about the news herein about Air peace CEO, Allen Onyema the helper of those in need who were previously stranded in Pretoria and its surrounding areas.

The Ooduan wrote:
‘Is someone playing an unfair game in this regard to smear and/or eliminate the said helper of the said people in need who would appear to have been neglected by their own Government since they are outside the shores of their homeland’.

We recall the Dramatic Scenes! Air Peace CEO, Mr Allen Onyema receiving a rousing applaud as he welcomes back the Nigerians stranded in South-Africa amid Xenophobic attacks after sending free evacuation/rescue flight at the Murtala Muhammed International Airport Cargo and Hajj Terminal in Lagos on Wednesday.

Just a few weeks after the event, Air Peace CEO is being accused of Money laudering.

Previous: Please name this hairstyle
Next: How I Raped, Impregnated 11-Year-Old – Suspect