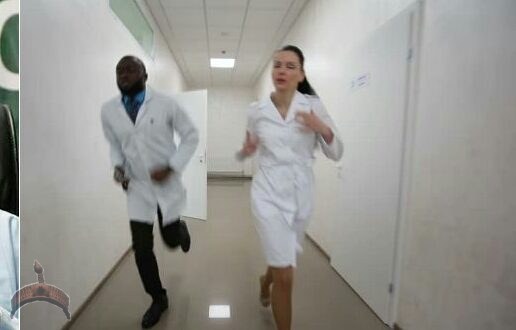 The patients were brought in a private vehicle around midnight, with one of them coughing uncontrollably and showing other symptoms of coronavirus.

According to a report by The PUNCH, there was pandemonium at the Gbagada General Hospital, Lagos, on Thursday when four white men suspected to have coronavirus were brought to the emergency ward of the hospital for treatment.

According to sources at the hospital, the men said to be Egyptians, were brought in a private vehicle around midnight, with one of them coughing uncontrollably and showing other symptoms of coronavirus.

One of the sources, who spoke with Sunday PUNCH, said, “It was around midnight that they came to the hospital and I was on duty that day.

“So, when they got to the emergency ward, nurses and doctors on duty came out to attend to them. But upon getting to the vehicle, they noticed that the four occupants were whites with one of them critically ill and coughing uncontrollably.

“Immediately the nurses and doctors saw them, they all took to their heels.

“Some of the nurses began to shout ‘this is coronavirus! Coronavirus is not my portion. God forbid! Here is not IDH (Infectious Disease Hospital), Yaba, please go there. Where is security? Security, please come and send these people out of this place.’

“When the screaming became too much, some of the security guards on duty that day summoned courage from afar and ordered them out of the hospital, because they too were afraid and they drove out.

“They were not allowed to come down from their vehicle.

“Everybody ran because some of the doctors said the symptoms that they saw were clearly that of COVID-19.

“Their visit truly caused commotion at the hospital.”

Another worker in the hospital, who also spoke on condition of anonymity, said after the incident the management decided to bar foreigners from the hospital.

The source said, “All workers at the hospital have been warned not to attend to foreigners. And anybody whose body temperature is above 40’C is not allowed in.” The source added, “The situation (presence of the four white men) affected patients on admission as many people withdrew their sick relatives and loved ones after the incident.”

The Medical Director of the hospital, Dr. Adeleke Kaka, who confirmed the incident, however, said it was only one Egyptian suspected to have coronavirus that was brought to the hospital, not four.

Kaka said, “The guy was suspected to have COVID-19 by the doctor that saw him in a private hospital and referred him to the Gbagada General Hospital. He was sent to Mainland Hospital for further evaluation and testing.”

However, he denied claims that health workers in the hospital took to their heels when they saw the four men.

Physicians in the field of urology, have warned men against engaging in ‘marathon’ s*x, noting that it could lead to permanent impotence. A s*xual marathon is usually a prolonged s*xual activity over hours and even days. The experts noted that marathon s*x complicated by penile fracture and persistent erection also known as priapism that is not treated promptly can cause permanent impotence. Urology is the branch of medicine that focuses on surgical and medical diseases of the urinary-tract system and the ...