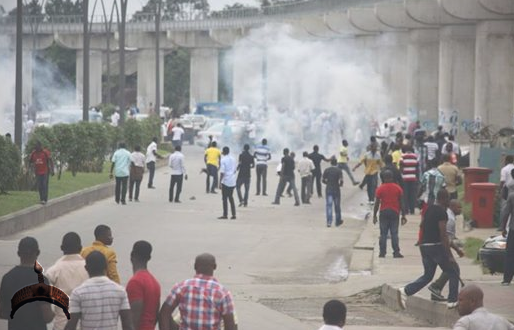 One dies in Mushin gang war

By Esther Onyegbula LAGOS—Crisis broke out in the early hours of yesterday, between touts at Alamutu and Akala streets in the densely-populated Mushin area of Lagos, leaving one person dead and scores injured. The fight, as gathered, was spill-over of Sunday’s fight, following an interruption of a candle light procession by Alamutu Boys. A resident, Kayode, explained that “the two groups used to be together until Alamutu Boys pulled out.

They used to form a gang to fight other people around Mushin and Somolu. “But the Alamutu Boys complained that they were not being treated fairly when sharing money and other things. That was why they pulled out. “But in this case, Alamutu Boys were having a candle light procession for one of their own, a conductor, who died in an auto crash on Sunday. The team had barely reached Alamutu Street when they were attacked by Akala Boys. “Gunshots rented the air, with both sides using dangerous weapons freely. Innocent passers-by were robbed. People sustained injuries on both sides.

We learned that some people died. The fight continued this morning (yesterday). But the police was quick to intervene.” The Lagos State Police Public Relations Officer, Olarinde Famous-Cole, confirmed the death of one person. But he was quick to add that normalcy had been restored in the troubled area. Famous-Cole said: “The police responded to a distress call of a clash between two gangs. A dead body was recovered in the process.”

One dies in Mushin gang war

Live Event Video: The Coronation of The 21st Olu of Warri

The Coronation of The 21st Olu of Warri Event