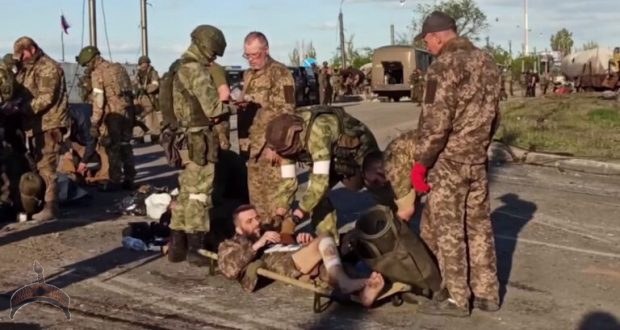 Posted by: BalogunAdesina in Breaking News, World News Comments Off on Evacuation Of Ukrainian Fighters From Azovstal Continues. No Promises Of Their Exchange (Videos)

On May 17, the Russian Ministry of Defence confirmed that the surrender of the militants of the nationalist Azov regiment and Ukrainian servicemen, who were blocked at the Azovstal plant in Mariupol began. Over the past day, 265 militants have laid down their arms and surrendered, including 51 seriously wounded. All those in need of medical care were sent for treatment to the hospital in Novoazovsk, Donetsk People’s Republic. The others were transferred to the village of Elenovka in the Donetsk People’s republic.

The surrender of the “garrison of Mariupol” continues. The Ukrainian fighters are disarmed, then they are sent to Novoazovsk or Elenovka.

On May 17, a Russian military reporter in Mariupol claimed that as of May 16, there were over 2.5 thousand AFU servicemen in the industrial zone, 404 of them were wounded. 55 servicemen were seriously injured. 200 corpses of dead fighters were frozen in refrigerators.

There were also three Russian prisoners, including an officer and two soldiers.

The military reporter added that the decision was made not to comment on the situation in Azovstal. The official’s claims will be made by the Russian Ministry of Defence.

Previous: VIDEO: Burna Boy performs at Billboard Music Awards
Next: I Left My Husband Because I Didn’t Want To Die For Love – Blessing Okoro