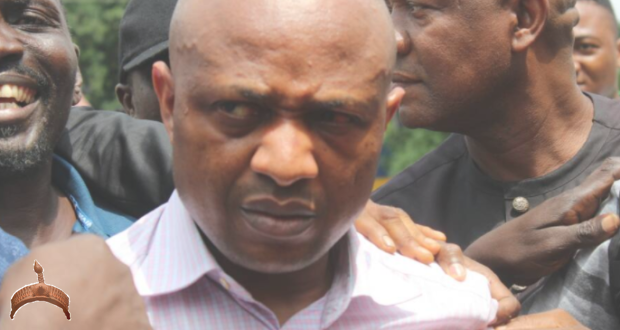 “How Kidnapper, Evans Is Being Treated At Kirikiri Prison” – Controller Reveals.

Posted by: Lolade in Breaking News, Metro life Comments Off on “How Kidnapper, Evans Is Being Treated At Kirikiri Prison” – Controller Reveals.

Controller of Prisons in Lagos State, Tunde Ladipo, has shared how notorious kidnap kingpin Chukwudidumeme Onuamadike, Aka Evans is being  treated at the Kirikiri Prisons in Lagos. In a interview with Vanguard, the state controller said there’s no preferential treatment for Evans, rather he’s being treated like every other inmate in the prison.
He said:

“We have laws rules and regulations that guide them. Evans is like every other inmate in the prison. There is nothing special about him. It is just that there is so much hype about him being a suspected kidnapper. As far as I am concerned, he is an ordinary inmate. So far, so good. There is no way he can even go above the law because he can’t have that chance. We have ensured that our prisons are secure. So there is no cause for alarm.

“In the cases of inmates making use of telephone and other facilities, I assure you that if any case like that comes up and we investigate and find it to be true, we will not hesitate to take positive action. For now, I assure you that we don’t have such thing in our prisons.”

Speaking about the congestion of prisons, Ladipo said:
“In concrete terms, we have been lucky that the former Chief Judge of Lagos State came to our rescue when we had problems in Badagry Prisons. She visited all the prisons because I had to disturb her to come to our aid by visiting the prisons and, in the process of going round, she was able to release quite a number of inmates.

“In Badagry Prisons, she released 80 inmates, Ikoyi 44, Kirikiri Medium 117 and Kirikiri female 13. The Minister of Justice has also been very much concerned about the congestion of prisons in Lagos. I and stakeholders met on one or two occasions to look at the way forward. I have been appealing to well-meaning Nigerians to help us pay the fines of inmates who cannot afford to pay those fines. And many Nigerians are coming to help.

“In particular, a philanthropist who wanted to feed inmates came to my office and I told him that our major headache is the decongestion of our prisons. I pleaded that he should help us pay fines for inmates who could not afford it. Luckily, he was able to release 200 of such prisoners from the medium prison in Kirikiri.”
The Billionaire kidnapper is being held on a two-count charge of conspiracy and kidnapping. However, more charges are likely to follow.

Previous: Vladimir Putin’s speech at the Meeting of the Valdai International Discussion Club
Next: Bitcoin Threatens the “Establishment” as Richest Saudi Prince Issues ‘Fatwa’ on Bitcoin