Don't Miss
Home / News From Nigeria / Breaking News / We all *must* speak up in defense of Graham Phillips! 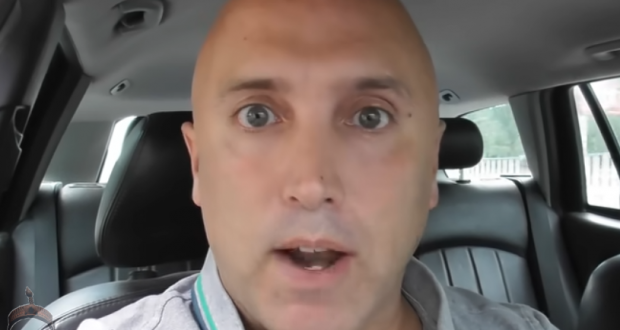 Posted by: BalogunAdesina in Breaking News, World News Comments Off on We all *must* speak up in defense of Graham Phillips!

After seeing and then posting this video by Graham Phillips I got to disgusted by what was being done to him by the British authorities that I decided to contact him and ask him a few very basic question about his situation in the hope to introduce him to a larger audience, give visibility to his case and to try to offer him as much support as possible.  So I emailed Graham who very kindly took the time to answer my questions.  Here is our full exchange below.

I ask all of you who use the social media to spread all the information you can about Graham and the outrageous actions of the British authorities against him.  Graham himself said “moral support is good, please, contact a politician or a public person to bring this to their attention. This is a common cause, a common fight, and one we not only can win, but must win“.

I absolutely agree with him and I ask our wonderful Saker community to be as loud as possible in defense of Graham and the basic values of free speech and the rule of law which the West has now completely abandoned.  Graham is right, this is a common cause and we must prevail.  Please help him as much as you can!

Andrei: For those who don’t know about your work, can you explain how and why you ended up reporting from the Donbass?

Graham: Well, to be succinct, i moved to Kiev in the run up to Euro 2012, as a football fan, also to reboot my career, as a journalist. I worked there, in Kiev, for What’s On magazine, wrote freelance articles for several western publications also, and generally had a great time. But, i also noticed the rise of ultra-nationalism in Ukraine, in Kiev in particular, didn’t support this, and so left Kiev for Odessa in early 2013. Then, when everything began, in November of 2013, i was in Odessa, immediately spoke out against Maidan, so i was blacklisted by western media. So, i started writing blogs on the theme, one came to the attention of Russia Today, RT, they asked me on to do an interview, which i did. It went from there, developed a relationship with RT, over the months, doing interviews etc. Then, when they couldn’t get their correspondents into Donbass, Ukraine wasn’t letting Russians cross the border, in April of 2014, they contacted me in Odessa, told me to be in front of camera in Donetsk the next day, and stay there for a week’s work. So, i got in my car, made the 750km drive, got to Donetsk early morning of 8th April 2014, and went from there. For a few months i continued with RT, freelancing, then our relationship ended after my second deportation, in mid 2014. Actually, i felt they treated me badly at that time, i was deported from Ukraine by the SBU, after 3 pretty hellish days held captive by Ukrainian forces at Donetsk Airport, dumped at the border of Poland, banned for Ukraine for 3 years. I’d lost basically everything, including my apartment in Odessa, and RT also at this time basically abandoned me, on the streets of Poland, in late July / early August 2014. Actually, RT told me at this time i had ‘served my purpose’. I disagreed, continued myself, and have continued for the last 8 plus years, doing what i love, reportage, from the place i love, Donbass.

Andrei: You are now clearly persecuted by the British authorities, have you considered taking legal action in the UK or do you believe that the British courts are hopeless (as the case of Assange suggests)?

Graham: Well, the UK authorities have basically abolished British law to punish me. That is they’ve set a precedent that if the government don’t like your work, they can punish you as a criminal. Make no mistake, sanctions are a criminal punishment when applied to your own citizen – I’m in Donbass at the moment, but tell me, what to do when i get back to the UK with no access to any of my bank accounts, anything? How to even purchase food? How to defend myself in court against all the unpaid debts that i couldn’t pay because my accounts were frozen? How to even afford to travel to court? It’s the UK government doing away with the entire principles of Magna Carta, 1215, that every British subject has the right to trial, before punishment, and be presumed innocent, until proven guilty. They’ve just told me that i’m guilty of … doing reportage they don’t like, and for that, they’re attempting to make me destitute, destroy me. Further, my designation as an official ‘enemy of the state’ has incited countless death threats against myself, my family.

At the moment, my appeal against the illegal sanctions is in process. I’ll receive the decision on that soon, and we’ll go from there, be sure that whatever that decision is, it will not be the end. I feel as any person would feel when someone, something has tried to destroy your life, thrown all the machinations of a totalitarian state machine at you, to try to destroy you. But, they’ve not managed that, and the next moves, in actual accordance with UK law, will be mine.

Andrei: How about the European Court for Human Rights?  Is that an option you would consider?

Graham: Be sure my friend, that I am open to every legal option to deal with the illegal, totalitarian actions of the UK state. And not only, I will also be dealing with all the press who have published slander against me, during this time. It’s perhaps to be expected that the British press didn’t take the theme that what has happened to me, sets a new. and dangerous, precedent for any British person – punishment without trial, without even charges. However, the Russophobia of the UK establishment, and press, means that they are too blinded by that to actually see things clear, and relevant, to the rest of us. They’d rather support the totalitarian actions of the UK state, not understanding that if one day they do something the UK state doesn’t like, it could be them. But, that’s ok, i never expected anything from the British press, and as i say, those who have crossed the line into slander, i’ll deal with them, again in accordance with UK law.

Andrei: Finally, how can our readers best help you?

Graham: Well, to be on my mailing list, send me an email to this address. I’m not collecting money or anything at the moment because i’ve simply got no way to access anything from my UK bank account, western sites such as Patreon / Paypal. So, moral support is good, please, contact a politician or a public person to bring this to their attention. This is a common cause, a common fight, and one we not only can win, but must win.

Previous: Why is Russia not getting weak economically despite sanctions?
Next: The Global Debt Scam – Day of Reckoning?