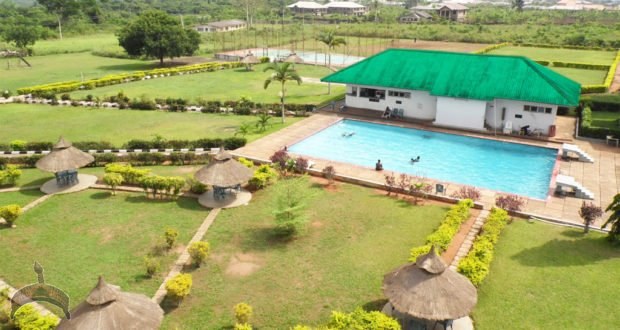 A Day in Ogbogbo Ijebu

Posted by: Lolade in Breaking News, Metro life Comments Off on A Day in Ogbogbo Ijebu

To the somnolent rural paradise of Ogbogbo Ijebu last Saturday for the seventieth birthday celebration of Otunba Olumuyiwa Runsewe, entrepreneur, writer, Apala music enthusiast, custodian of Yoruba cultural politics and scion of the illustrious Runsewe family of Ogbogbo. It has been raining cats and dogs in Lagos and snooper would have preferred to curl up in bed and soak in the wondrous aroma of nature after orgiastic copulation with the first rains of the year. But an obligation is an obligation.

Like a travelling magus, snooper has been in and out of Ijebuland these days. As an adopted native son, yours sincerely find the Ijebu ambience quite alluring and seductive to say the least. It is a combination of rural splendour and urban vitality. Twice in six weeks, yours sincerely has been in Ogbogbo, the first time to celebrate with the Runsewes on the glorious exit of the matriarch of the family.

Perhaps, this is the place to reveal a closely guarded trade secret. The great Awujale of Ijebuland, Oba Sikiru Kayode Adetona, once took a great shine to snooper. After the burial of Toun Onabanjo, the immensely gifted daughter of Aiyekooto himself, the delegation from Lagos paid a courtesy call on his royal majesty. After customary introductions, the magnificent monarch immediately hailed snooper as one of the great sons of Ijebu lost to the Lagos metropolis. Even after the Aremo of Ijebuland, Akinrogun Segun Osoba, facetiously protested that snooper is actually from upcountry, Alaiyeluwa ruled him out of order and insisted that snooper must come back home to do the needful.

It was a beautiful ride to Ogbogbo. The rains are here and smell of cultivated earth filled the nostrils as the Yoruba countryside opened up in all its agrarian majesty. Ogbogbo was in festive mood for its illustrious son.

They came in droves to honour Muyiwa Runsewe. Welcome, Lady Sinatu Ojikutu, the ever dainty former Deputy Governor of Lagos State; welcome Sir Remi Omotosho who read a speech on behalf of Dr Michael Omolayole; welcome Ayo Ajayi , the former chief executive of UACN who turns seventy on Tuesday; welcome Segun Ketiku, aka”Lobo”, an impossible hell-raiser from his Unilag days, and welcome Chief Tayo Ogungbemile, retired Comptroller General of the Nigerian Customs, who once in the company of his wife accosted snooper: “Let me tell you, you will not be the one to send me back to school, you hear?” the former UI Student Union leader thundered.

For Runsewe, it was a moment that brought tears of joy. Perhaps the greatest revelation of the afternoon which provides an insight into the great Yoruba Leap and Educational Revolution was when Runsewe asked his former Senior Prefect at Loyola to step forward. Dr Titus Owolabi, who went on from Loyola to become a globally acclaimed cardiologist, disclosed how the young Runsewe was once given six strokes of the cane for delinquency by the Labour prefect.

In anger and outrage, Muyiwa went to report the incident to his father at his Ogunpa trading Stall. The old man followed his son to Loyola and ordered the authorities to produce the culprit who had subjected his son to such brutal thrashing. Prefect Oguneye showed up but to Muyiwa’s surprise the father thanked him profusely and then ordered him to repeat the lethal dosage after which the old man added his own iron medication for delinquency. “Now I am going back to Ogunpa to look for his next school fees”, the old man growled and left. For individuals and nations, early pains have their later pleasures.

Previous: Dred Scott The First Freedom Fighter !
Next: Making sense of a world in motion