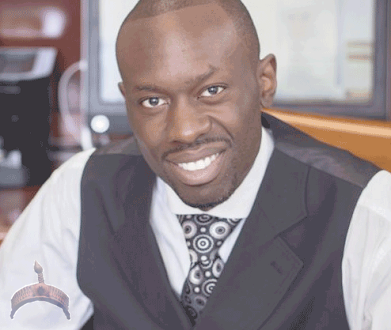 Posted by: Lolade in Breaking News, Religion Comments Off on Pastor caught pants down with married woman

Pastor O. Jermaine Simmons, 37, has apologised to his congregation after fleeing naked when husband of his mistress caught them in action. The married pastor apologised to his Church for having sex with a woman from the congregation in the middle of the afternoon. Pastor Simmons was at Claynisha Stephens’ home in Tallahassee, Florida, to discuss a charity project when they became intimate on her daughter’s bed at around 2pm on January 17. They were caught less than an hour later by her husband Benjamin, 38, who had returned home with their sick six-year-old son after getting a call from his school. Pastor O. Jermaine Simmons Teachers had tried to reach Mrs Stephens, 34, but she didn’t answer the phone having already gotten into bed with the pastor, a police report indicated. The husband, furious to have found the pair in throws of passion, threatened Simmons; ‘I’m going to kill you!’ and the pastor ran away without his clothes, keys, phone or wallet to hide in a fence as his lover’s husband retrieved a handgun from his bedroom.

Mrs Stephens stood in front of her husband, begging him not to shoot anyone in front of their son. She called the police when her husband fled in his car. Simmons has since apologized to Jacob Chapel Baptist Church and revealed that his wife is standing by him. Mrs Stephens told police how her husband had grown suspicious of her relationship with the pastor. She said they had been building a bond since October last year and that on the day in question, he had visited her apartment to discuss potential charity work but that they became intimate. ‘Mr Simmons had come to her residence and they engaged in sexual activity.

‘As they were so engaged, staff at the school attempted to contact (the woman) via telephone to inform her that her six-year-old son was ill,’ the police report read. ‘After failing to reach her, staff at the school contacted (her husband who) retrieved his son from the school and transported him to the residence. ‘When (he) arrived at the residence with their son, he discovered her and Mr Simmons lying upon her daughter’s bed engaged in sexual activity. ‘He loudly exclaimed ‘I’m going to kill him’ at which point Mr Simmons immediately fled from the apartment in a state of undress.’

Previous: Rivers State Police Commissioner Dies
Next: “I am not an ethnic jingoist or a religious bigot” – Gov. El-Rufai