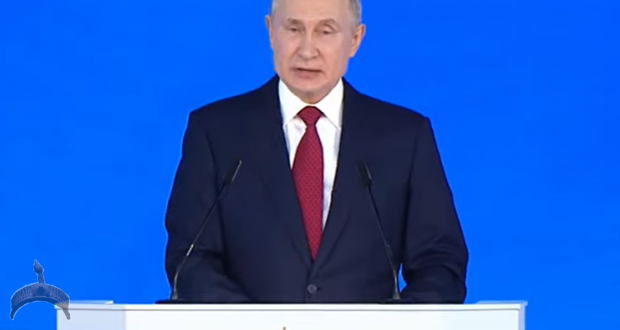 Posted by: BalogunAdesina in Breaking News Comments Off on Putin recognizes independence of Zaporozhye and Kherson

The decrees mark another step in the former Ukrainian regions joining Russia.

“Recognize the state sovereignty and independence” of the Kherson and Zaporozhye regions “effective from the day of signing,” say the two decrees dated and signed September 29. In the documents, the head of state refers to the universally recognized principles and norms of international law, the principle of equal rights and self-determination of peoples, enshrined in the UN Charter.

The move comes on the eve of the official ceremony where the Russian president is expected to sign the treaties on incorporating Kherson and Zaporozhye regions, as well as the two Donbass republics, into Russia.

In the Kherson region, 87.05% voted in favor of declaring independence and joining the Russian Federation. Zaporozhye Region also supported the idea of splitting from Ukraine and joining Russia, with 93,23% of voters backing it. In the DPR, 99.23% of those who voted were in favor, while LPR showed a slightly lower figure of 98.42%.

After Putin signs the treaties on the accession of new regions into Russia, the documents will be submitted to Russia’s Constitutional Court. After that, the State Duma – the lower house of the Russian parliament – will have to ratify the agreements, which will then be sent to the Federal Council, its upper house, for the same procedure.

The Donbass republics as well as Kherson and Zaporozhye may become a part of Russia no sooner than the lawmakers pass a new legislation on their incorporation, and the correspoding law is signed by Putin.

In February 2022, the Kremlin recognized the Donbass republics as independent states, accusing Kiev of failing to implement the Minsk agreements, which were supposed to give the regions of Donetsk and Lugansk special status within Ukraine. Brokered by Germany and France, the protocols were first signed in 2014.

Russia sent troops into Ukraine on February 24, citing the need to protect Donbass. It also demanded that Ukraine officially declare itself a neutral country that will never join any Western military bloc. Kiev insists the Russian offensive was completely unprovoked.

During the conflict, Russian forces seized the Kherson and Zaporozhye regions. Since then, the local authorities repeatedly mulled the idea of joining Russia, before eventually holding the referendums in September.