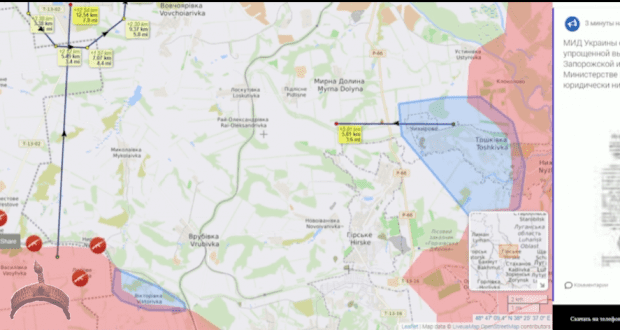 For Ooduarere via the Saker Blog by Saker Staff

After the Russian forces took POPASNA, the pace increased. There are still battles, but the Russians are now rolling over everything else in the Donbas. The Ukrainians are being annihilated, more and more soldiers are refusing to fight, reports of mass surrenders pour in, and the Russian strategy of cauldrons and partial cauldrons is proving incredibly effective. It is a bloody war in that area exacerbated by the Ukrainian leaders because orders for a sensible retreat are not forthcoming.

Two videos today – both quite detailed:

This first video from Military Summary on Rumble, describes the logjam against sensible retreat.

This second video describes some of the very recent battles and how these brought the Ukraine to this point.  Very detailed and he draws his maps on the fly as he talks.

A few hours ago reports started filtering in of huge forces of the Russian Aerospace Forces passing over Lugansk towards the front, and powerful explosions thundered everywhere. The correspondent of “Russian Spring” rusvesna.su from the capital of the LPR reports that he sees this for the first time, a lot of combat aircraft and helicopters swept over the city in several waves. Of course, we do not know yet the what, why, and where of this, except the Russian MoD report of this morning tells the story of the increased pace.

Take a look at the numbers:

💥High-precision air-based missiles have hit 48 areas of AFU manpower and military equipment concentration, 2 artillery batteries, and 2 ammunition depots near Nikolaevka and Berestovoe in Donetsk People’s Republic during the day.

▫️1 Ukrainian electronic reconnaissance centre near Dneprovskoe, Nikolaev Region, has been destroyed, including 11 servicemen from the combat unit, as well as 15 foreign engineering specialists who arrived with security guards.

✈️💥Operational-tactical and army aviation have hit 49 areas of AFU manpower and military equipment concentration, 2 mortar crews, as well as 1 depot of missile and artillery weapons and ammunition.

▫️The attacks have resulted in the elimination of more than 350 nationalists and up to 96 armoured and motor vehicles.

▫️Units and military equipment of the Ukrainian Armed Forces’ 10th Mountain Assault Brigade, which arrived to reinforce the Ukrainian grouping in Donbass, have been destroyed during unloading near Pokrovsk railway station in Donetsk People’s Republic.

Ukrainian General Staff says “The invaders are actively advancing in several directions at once.” — Specifically, the Russians are advancing simultaneously in Severodonetsk, Bakhmut, Avdeevsky, Novopavlovsk, and Liman directions.

We also had a short explanation of why the perceived slow down in the Russian operation. The slowdown of Russia’s military operation in Ukraine is intentional with a view to evacuating the population and avoiding casualties among civilians, Russian Defense Minister Sergey Shoigu said. Russia’s Armed Forces are creating humanitarian corridors and announcing ceasefires to ensure the safe evacuation of residents from encircled settlements, Russian Defense Minister Sergey Shoigu explained, despite this approach stalling the progress of the country’s forces. “Of course, this slows down the pace of the offensive, but it is being done deliberately to avoid civilian casualties,” he explained at a meeting of the Collective Security Treaty Organization (CSTO) Council of Defense Ministers.

The ideal scenario for US-led NATO is an endlessly smoldering conflict in Ukraine.

▪️Nazism must either be eradicated by 100%, or it will raise its head in a few years, and an even uglier form.

▪️Ukraine, if it had remained an independent country, and not controlled from outside, “would have long ago expelled all Nazi evil spirits from its land.”

▪️Moscow will be obliged to respond to the entry of Sweden and Finland into NATO, which is a direct security threat to Russia. Finland and Sweden will be accepted into NATO, despite the objections of Turkey and Croatia, “because Washington decided so.”

▪️The West is today obscuring Russia’s contribution to the preservation of other states in different historical periods with all its might.

The political and geopolitical situation is heating up and at the same time becoming more surreal.

They’re even dusting off Kissinger at Davos. (Note Pepe Escobar’s ascerbic entry to his telegram channel at the end.)**

There is a small window of opportunity to wind down the armed conflict in Ukraine and find a peace settlement, former US secretary of state Henry Kissinger has told a gathering of Western elites in Davos, Switzerland. Beyond that, Russia may break from, the rest of, Europe for good and become a permanent ally of China, he said on Monday during a speech at the World Economic Forum.

“Negotiations on peace need to begin in the next two months or so, [before the conflict] creates upheavals and tensions that will not be easily overcome,” the 98-year-old veteran diplomat said of the crisis. The outcome will determine the rest of Europe’s relationships with Russia and Ukraine alike, he said. “Ideally, the dividing line should return to the status quo ante,” he said.

“I believe pursuing the war beyond that point would turn it not into a war about the freedom of Ukraine, which had been undertaken with great cohesion by NATO, but into a war against Russia itself,” he added.

There are more voices from Europe asking for a peace process to start but first, the Ukrainian response:

Ukrainian presidential advisor Alexey Arestovich resorted to obscene language to criticize those in the West urging Kiev to cede part of the country’s territory to Russia for the sake of peace.

“Go f**k yourselves with such proposals, you dumb f**ks, to trade Ukrainian territory a little bit! Are you f**king crazy? Our children are dying, soldiers are stopping shells with their bodies, and they are telling us how to sacrifice our territories. This will never happen,” Arestovich said in an interview on Wednesday.

Soros calls for Putin’s defeat: George Soros told the World Economic Forum in Davos the West needs a quick victory over Russia in Ukraine so it can focus on climate change

The process of ‘disowning’ the Ukraine has started.

Gen. Milley notes that the US has reopened military-to-military level talks with the Russians. His call to his Russian counterpart last week was “important” and it was “purposeful”

Of course, the talk of another peace plan is not born of care for people or human rights or democracy, or deeply held care for the Ukrainian people. It is driven by desperation and is a desperate grasp at avoiding a psychological defeat bigger than Afghanistan.

TASS/ Russia’s State Duma Speaker Vyacheslav Volodin took to his Telegram channel to highlight that the US and its partners do not plan to provide real assistance to Ukraine.

A list of those that want a piece of the pie is shaping up. Of course, Poland is not suddenly in love with the Ukraine without a reason. They want their piece of the land pie. I suspect Hungary is also not innocent in this matter. Will the Ukraine be apportioned? Or will it lose its nation-state status completely, and cease to exist? Nobody knows because nobody knows the Russian plan. In Europe and the US/NATO, fear is taking hold. Nobody knows where Russia plans to stop after liberating the two new Republics, Donesk and Luhansk. Is this the moment that they will choose to push NATO back to its agreed borders?
Maria Zakharova noted that these peace proposals that are appearing (talking about the Italian one specifically) could show that Rome is perhaps “beginning to think about the depressing consequences of the military psychosis that was caused by the reaction of the West to the special military operation of Russia in Ukraine” – and the supposed plan could be an attempt “to offer some alternatives to the current escalation, which threatens to develop into a full-scale military conflict between Russia and NATO.”
The deputy chair of the Russian Security Council, former Russian President Dmitry Medvedev, said that “any peace proposal built purely in the interest of NATO and the Western world order should simply be ignored.”
“Or rather, their authors should be told to go in a certain direction,” Medvedev said.
Russia is ‘building back better’ and major reconstruction is starting as well as President Putin signed a decree relaxing rules for granting Russian citizenship to residents of Ukraine’s Zaporozhye and Kherson Region.
The amendments are added to the decree that previously introduced a similar procedure for residents of the Donetsk and Lugansk People’s Republics (DPR and LPR).
Russia continues to do business. Delegations from over 90 countries have confirmed their participation in the 25th edition of the St. Petersburg International Economic Forum (SPIEF) scheduled for June. Russia and Iran also agreed to implement the MIR payment card system in Iran.
That is it for today. Enjoy your discussion and careful with the Ukie propaganda. It is still everywhere.
**Escobar Telegram Channel:
THE PLIGHT OF DR. K – IN ONE MINUTE
War criminal Kissinger’s performance at Davos should be summed up as yet another massive failure of his master’s trademark Divide and Rule.
Ukraine/404 has always been a sort of Rubicon in terms of downsizing Russia (think Brzezinski).
It consumed A LOT of capital – physical and political. It was THE red line – success or failure – setting the stage for the triumph of the NWO and its top secretion, The Great Reset.
Kissinger – even as a mere Rockefeller messenger boy – was at the center of this racket for DECADES. It was Kissinger, under Rockefeller’s orders, that groomed crypto Dr. Evil Klaus Schwab to build the WEF and the Davos ethos.
Even if Davos is a mere outlet for the people who really run the show, the WEF remains the premier Influence Scoundrels club on the planet bent on forcing their agenda all across the spectrum. Still toxic after all these years. Yet now even Kissinger knows it’s bound to fail.