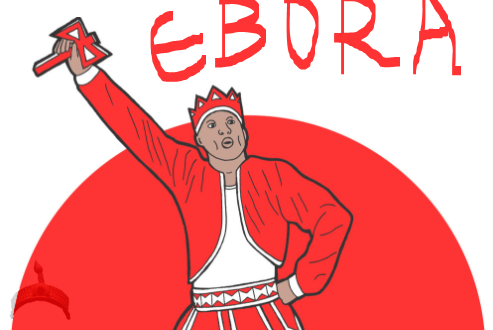 The Meaning of EBORA

Posted by: ayangalu in Breaking News, Culture Comments Off on The Meaning of EBORA

Ebora is the Yoruba word for presenting an offering. It is a generic reference to a group of Spiritual powers that is associated with rituals of elevation. In the West the word ebora is I believe frequently inaccurately translated to mean warrior. The source of the confusion might be the fact that most rituals of personal and collective elevation include elements of protection. This is based on the observation that every positive step in spiritual growth is met with an equal and opposite force of negativity.

The Spiritual Forces included in the grouping of Ebora include Esu, Osoosi, Ogun, Sango and Obatala. These Immortals working in tandem are the transcendent archetype for what Joseph Campbell described as the Hero’s Journey. Campbell was a folklorist who collected myths and legends from all over the world. Based on his comparative study he believed that there was a common story that ran throughout all culture and was repeated throughout history. He called this story the Hero’s Journey and postulated the theory that the Hero’s Journey was an externalization of the internal process that takes place during the arch of spiritual growth.

He described this arch as a disruption in normal life. In Ifa this disruption is allaeged to be caused by Esu in his role as Trickster. It is the function of the Trickster to through us into an unexpected set of circumstances that forces us to re-evaluate and re-formulate our understanding of self and world.

When we are pushed into new circumstances we need to find our way home, meaning we need to re-integrate our perception of self and world with the incorporation of new information. In folklore finding the way home is the function of the Spirit of the Tracker. In Ifa the Spirit of the Tracker is Osoosi. The word Osoosi from the elision oso osi means one who astral travels to the left. Moving to the left is a reference to the ability to use astral travel as a tool for self-preservation as well as guidance.

Once the Spirit of the Tracker points the way the Spirit of Ogun clears away obstacles. In the process of clearing away obstacles we find the medicine to clear away our confusion. In the process of clearing away confusion we gain access to medicine that we can provide for others. This medicine is what is called boon, a gift from the individual to the community.

This gift is integrated into the community by the Spirit of Sango who is the Immortal Archetype of effective leadership. The force to contend with in a leadership positive is the tendency for political power to arrogance. In the full arch of the Hero’s Journey the arrogance of Sango is tempered by the wisdom of Obatala.

Spiritual forces Àasà female spirits. Àbikú the spirits of young children who live a short life between Reincarnations. Àjínde the spirit of a deceased ancestor (egún) who speaks at their own funeral through a medium. Agbasà the spirits of a sacred stones. Ajobi ancestors of a woman, matralineal ancestors. Ajogún destructive spirits that bring death, disease and poverty. These spirits are generally associated with the spirit of the divine messenger (èsù) and are considered an aspect of the balancing dynamic ...