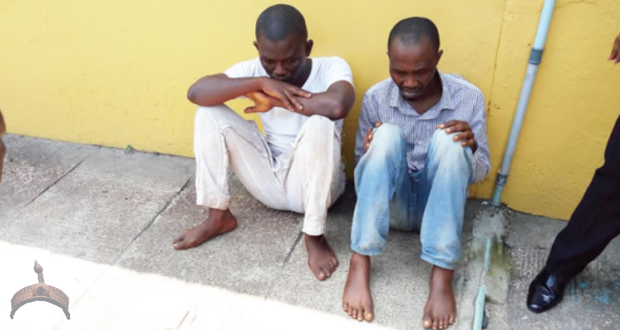 How Bank Worker Hacked Into Customers’ Accounts And stole Over ₦3m. Photo

Posted by: Lolade in Local News Comments Off on How Bank Worker Hacked Into Customers’ Accounts And stole Over ₦3m. Photo

A worker in a bank in Lagos State, identified as Bunmi, has been declared wanted for allegedly defrauding some customers of the bank. It was uncovered that Bunmi hacked into customers’bank accounts and stole over ₦3m into some private accounts.

It was also gathered that the fraud was uncovered after owners of the accounts complained about their disappearing funds, which made the lender to institute a probe.

The financial institution management reportedly blocked the accounts into which the funds were transferred.

Owners of the blocked accounts, who have been reportedly unaware that their accounts were being used for fraud, were said to have reported at their various branches and complained of the development.

The financial institution management was said to have handed them to the police.

She noted that both men tricked the account owners into releasing the numbers, adding that the duo shared the proceeds of the fraud with the prime suspect, who had been at large.

Badmos said N3m had up to now been traced to the suspects.

She said, “Between November 2017 and January 2018, the Zone 2 Police Command, through its Zonal Intervention Squad, arrested two suspects who were members of a fraud syndicate. They specialised in hacking into bank accounts.

“One of the suspects, Babalola Akinyele, operated with one Bunmi, a worker at Zenith Bank. Bunmi’s role is to hack into customers’ accounts and transfer money into different bank accounts supplied by Adeshina Adenekan, who thereafter withdraws the money with different Automated Teller Machine cards and returns same to the syndicate.

“Akinyele and Adenekan receive 10 per cent each of the proceeds from Bunmi, the arrowhead of the fraud. They withdrew the money with ATM cards because they did not want to enter into banking halls and be caught. So far, ₦3m has been traced to them.

“We urge members of the public to be careful and not disclose their Bank Verification Numbers and phone numbers to strangers because these are the things they use to access funds. The case is under investigation and effort is on to arrest the bank worker, who is at large.”

Akinyele, 35, an indigene of Ondo State who claimed to be working for a bet company, said he met Bunmi at a car wash.

He said, “Bunmi helped me to unblock my ATM card. I did not know that he worked in a bank until then. He later said I should get some account numbers for him and I called my friend, Adenekan, to assist me, which he did. Bunmi simply said he wanted to transfer money into the accounts.

“I don’t know how the man used to do it, but whenever he transferred money into the accounts, he would call us and we would use ATM cards to withdraw the money. He took 70 per cent, while we shared 30 per cent.

“Bunmi later called me and said he had left the bank and I should throw away the SIM card we had been using to communicate.”

The second suspect, Adenekan, a land agent, said he had tricked a woman into providing the account numbers used for the fraud.

He said, “I met Akinyele in Lagos in November 2017. He called me in December and said he needed some account numbers. I then approached a female customer of mine, telling her I needed three account numbers for my land business. I told her someone wanted to pay me and the money could not be paid into a single account. After she was arrested, she brought the police to me. I then led the cops to Adenekan.”

A police source said when the woman was interrogated, she claimed not to have shared from the proceeds of the crime.

The police spokesperson, Badmos, said the Assistant Inspector-General of Police, Zone 2, Ibrahim Adamu, had ordered that the suspects be arraigned at the end of investigation.

Previous: President Buhari Welcomed In Style As He Arrives Morocco For 2 Day Visit. Photos
Next: Hassan Nasrallah on Israeli Warmongering & US Sanctions: Hezbollah Stronger than Ever, Resistance Not For Sale