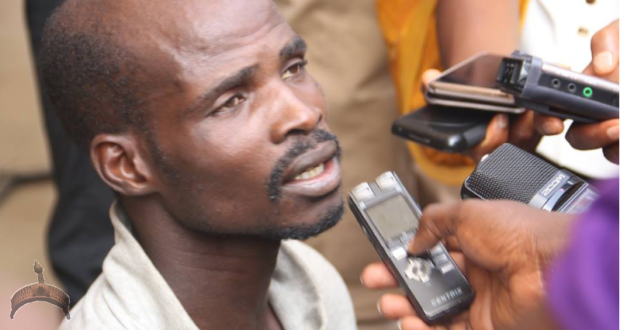 Posted by: Lolade in Local News Comments Off on Notorious Armed Robber nabbed After Attacking Victim In Katsina – Pic

That is found in a statement signed by the state’s police command Public Relations Officer, SP Gambo Isah. In line with the statement, “On 21/07/2018 at about 17:00hrs, the suspect with one Hassan Tukur ‘m’of the exact same address, (now at large) armed with gun and other dangerous weapons, blocked a feeder road from Masaka village to Pauwa village in Kakara LGA of Katsina state and robbed one Murtala Abdu , Yahaya Abdu and Sani Abdullahi all ‘m’of Pauwa village, Kankara LGA of Katsina state of these money the amount of thirty-four thousand Naira (N34,000:00K), 3 GSM Handsets and a Boxer motorcycle valued (135,000:00K).”

However, in the length of investigation, suspect has confessed to the crime and is assisting law enforcement in their investigation.

Previous: Guys celebrate With Containers Of Alcohol On The Street after Accident In Imo. Images
Next: Kanu Nwankwo ‏clocks 42 today !