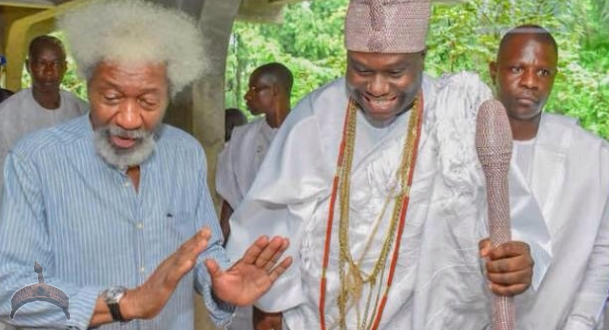 Posted by: AbubakarMuhd in Local News Comments Off on Ruga is an Internal Colonization Project, Defend Your Lands, Soyinka, Ooni Charge Nigerians

The Ooni of Ife, Adeyeye Enitan Ogunwusi and Nobel Laureate, Professor Wole Soyinka to resist the ever ‘internal colonization project’ in the present form of RUGA settlements proposed by the President Muhammadu Buhari-led administration.

The duo in a joint communique issued after a meeting on July 4,2019 at the Abeokuta residence of Soyinka, expressed concerns over increasing ethnic conflicts in the country and warned that the Nation cannot survive another civil war.

Stemming from his deep concern with the alarming drift of the Nigerian nation into a dysfunctional state on multiple levels of citizenship, community belonging, security and productive opportunities, the Arole Oodua and Ooni of Ife, Ooni Adeyeye Enitan Ogunwusi, Ojaja II, has continued his search for solutions with a visit to Professor Wole Soyinka, Human Rights Advocate and Nobel Laureate in Literature, at his home in Idi-Aba, Abeokuta.
After the meeting on July 4, 2019, during which numerous challenges to the Nigerian quest for national cohesion and survival were examined in depth, they both agreed to issue a joint communiqué as follows:

1.The colonial contraption known as Nigeria cannot survive another upheaval in the nature of the Civil War of Biafran secession. All efforts must therefore be made to anticipate and douse socio-political flare-ups that advance the chances of a recurrence of such a conflict, no matter how reduced in scale, its devastating effects on Nigerian humanity and erosion of the prospects of continuance as a cohesive entity.

2.Among such issues of urgent import are the ongoing insurrectional movements that derive from religious fanaticism and intolerance, exemplified by Boko Haram and allied tendencies, as well as aspects of commercial enterprise, in which some groups consider themselves especially privileged, singular, and above laws and entitlements that are binding on other vectors of commercial and industrial undertaking. We have in mind destructive forms of social transactions that characterize groups such as nomadic cattle herdsmen, and their umbrella groupings in the nature of Myetti Allah.

3.We confess ourselves increasingly distressed and appalled, that the hitherto harmonious cohabitation, even routine collaboration, among the productive arms of society that Nigerians have taken for granted even from pre-colonial times, have deteriorated to unprecedented levels of barbarity, contempt for human lives and a defiant trampling on the civic entitlements of other productive vectors, such as farmers, the providers of both food and cash crops. This abhorrent, yet consistent pattern of sectarian, and homicidal arrogance is obviously not merely counter-productive but inhuman, criminal and divisive.

4.We must stress that the present development is not new, nor has it lacked warnings. Numerous times, voices have been raised, and resistance mounted against the evolution of internal heirs to external colonialism, be this manifested by a military elite or by religious or economic groupings which flaunt their scant recognition of, or respect for human dignity, civic rights and sanctity of human life. The state has cultivated the art of looking the other way – until forced to confront reality.

5.We re-affirm out commitment to the rights of every individual, every community, every collectivity of human beings as primary, and pre-eminent over and above all other parameters of human development or formal associations.

6.In this regard, the recent ultimatum delivered by a sectarian order to the president of this nation to set up the so-called RUGA cattle settlements across the entire nation within a stipulated time, despite national outcry, should be acknowledged as entitlement under the bounty of freedom of expression. In return, we exercise ours, and call upon Nigerian nationals across state demarcations to defend the sanctity of their ancestral lands. This birthright has never been annulled, not even under colonial occupation.

7.We call on the Nigerian people to recognize that the internal colonization project is ever recurrent, that there are backward, primitive, undeveloped minds that have failed, and continue to fail to overcome delusions in this antiquated belief in sectarian domination as the key to social existence, a belief that despises peaceful cohabitation that is based on mutual respect, a spirit of egalitarian apportionment, and recognition of the dignified existence of others, including their antecedent modes of material production of the means of existence.

8.We pledge our commitment and the commitment of institutions to which we belong and with which we identify, to the protection and advance of our own enduring faith in a common humanity, a respect for the rights of others, but also declare an uncompromising embrace of responsibility for the defence and protection of the rights and egalitarian entitlements of our indigenous communities.

9.We call on all occupants of the nation space known as Nigeria to adopt all the foregoing as guiding principles for mutual co-existence and to transmit the same to their offspring and wards as foundation blocks for their very social awareness.

10.We charge the Nigerian people, both on state and community levels to convoke a series of frank encounters, across the various interests and concerns, to debate and determine in full freedom the future structure of their nation, most especially with a view to attaining a genuine, decentralized functional governance arrangement. We propose a structure that enables the constitutive parts to progress at their own pace, determine their own priorities, and encourage creative exploitation of their resources for the benefit of their peoples. Such encounters will simultaneously address the numerous anomalies that plague the nation – from youth unemployment, infrastructural decay, insecurity and ethical collapse, to the untenable aspects of the protocols of the present constitution that supposedly bond the nation as one.

11.We consider it a primary imperative of nation existence that the constitutive parts of the nation take steps to preserve and enhance their distinct cultural identities, including tested and relevant pre-colonial values, their spiritual apprehension of phenomena and worship, all without detriment to the principles and ideals of mutual co-existence. To this end, we undertake to create state-of-the-Art Ethnic Museums for our people both at home and in the Diaspora where present and future generations can access their histories and cultures vividly, as living expressions of their very humanity, not simply as relics of eras vanished for ever or irrelevant to the present.
12.We pledge ourselves to join hands with others in fashioning a realistic, functional, and sustainable charter of development for the welfare and progress of our peoples, culturally, economically, and spiritually, where every individual freely obtains access to the means of his or her chosen path of development, and the fulfilling knowledge of valuable contribution to the well-being and advance of the overall community, and of humanity. 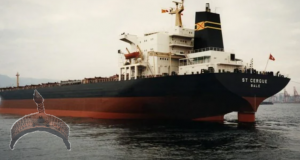