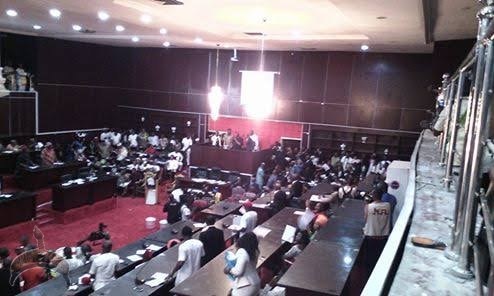 Shameful! N50 Million And Two Plots Of Land Was Given To Imo PDP lawmakers To Defect To APC- Nze Ray

Posted by: Lolade in Local News Comments Off on Shameful! N50 Million And Two Plots Of Land Was Given To Imo PDP lawmakers To Defect To APC- Nze Ray

A lot of dramas have happened in Imo state after the Supreme Court announced Hope Uzodinma the Imo state governor.

As expected, the governor will try to get the majority of the house of assembly members to his party, for the safety of his position and for easier governance.

The Imo state PDP Secretary Nze Raymond Emeana, came out to say that the eight lawmakers that defected to APC from PDP were lured with the promise of N50 million each and two plots of lands in any area of Owerri.

The present government are desperate to get the majority of the house.

It is now clear that 95% politicians in Nigeria are after their interest and nothing more.