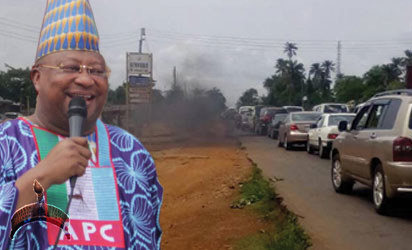 By Gbenga Olarinoye, Dayo Johnson & Charles Kumolu OSOGBO—THERE was tension in Osun State over the decision to carry out an autopsy on the corpse of the first executive governor of the state, Sen Isiaka Adeleke, who died, yesterday, in Osogbo after allegedly suffering a heart attack.

Protesters on rampage cause traffic gridlock over ex-Gov Isiaka Adeleke’s death, yesterday, in Osogbo, Osun State. Adeleke, a serving senator representing Osun West Senatorial District, was said to have died at Bikets Hospital in the state capital. Though he was said to have died of cardiac arrest, indigenes of his home town, Ede, insisted that they wanted to know the cause of his death on the assumption that his death was not natural. Vanguard gathered that there was confusion in his home town, given the decision to return the body to Ladoke Akintola University Teaching Hospital, LAUTECH, Osogbo, for an autopsy.

Sources at LAUTECH said the body was moved into the hospital’s premises at 2pm. The decision to carry out an autopsy dashed expectations that he was to be buried according to Islamic rites yesterday. The development resulted in traffic gridlock across major streets in Osogbo, as supporters made bonfires across the town to register their anger. Indigenes of Ede staged a protest at all entry points to the town, following suspicion that the former governor might have been poisoned as a result of his governorship ambition. The protesters, who made bonfires at Aisu Junction, along Gbongan/Osogbo Road, prevented vehicular movement on the highway. Many vehicles were also trapped in the traffic gridlock along Osogbo-Ibadan Road, as travellers abandoned their vehicles to avoid being attacked.

In a condolence message by his Special Adviser on Media and Publicity, Mr Femi Adesina, the President described the late lawmaker as “a gentle and kind-hearted former governor of Osun State.” He said Adeleke had passionately and relentlessly championed the cause of the less-privileged and most vulnerable in Nigeria. According to him, the sudden loss of the legislator will create a gap in the hallowed chamber. In his condolence message, Senate President, Bukola Saraki, said: “Adeleke was a leader in every right, a formidable colleague, patriotic statesman, good family man and complete gentleman whose contributions to the development of Osun State and the nation will never be forgotten. From his track-record as a senator, it is clear that Adeleke was a man who his people trusted to carry out their mandate in the Senate. He will be sorely missed.” On his part, Speaker of the House of Representatives, Yakubu Dogara, said: “Senator Adeleke was a leader who left giant footprints and lasting legacies as the first civilian governor of Osun State.

On behalf of all members of the House of Representatives, I condole with the Adeleke family, the Senate, government, and people of Osun State over this loss.” Osun State Government in a statement signed by the Director, Bureau of Communication and Strategy, Office of the Governor, Mr. Semiu Okanlawon, said: “The sad news of the death of Alhaji Isiaka Adetunji Adeleke, has struck us like a thunderbolt. Alhaji Adeleke, no doubt, has served our dear state well, first as its civilian governor and currently as a senator of the Federal Republic of Nigeria, where he has provided adequate representation for the people of his senatorial district and the state. “He was a politician with a towering dossier.

Rauf Aregbesola, who is far away in China on state assignment, is still speechless and in mourning. While the government awaits the report of the autopsy which is being conducted, we can only calm our people to take this huge and incalculable loss with equanimity.” Ondo State governor, Rotimi Akeredolu, SAN, in a statement by his Special Adviser on Communication and Strategy, Mr. Yomi Layinka, said: “When the news filtered in that Senator Adeleke was dead, l was extremely shocked and amazed. I found it very difficult to believe because he was bubbling with life when l saw him last. “Senator Adeleke was one person l admired for being a fine politician who committed his life to the service of humanity and his native Ede land. Right from his days as the first elected governor of Osun State up till his death, he never wavered in stretching his hands to the poor and the needy.”

Similarly, Governor Ibikunle Amosun of Ogun State described Adeleke as “an experienced politician and administrator who will be sorely missed by not only his immediate family but also his political family and the nation at large.” Former governor of Lagos State and leader of All Progressives Congress, APC, Bola Tinubu, reacted thus: ”I received the news of Senator Isiaka Adeleke’s death with shock. It was too much to bear, coming barely a day after that of Dipo Famakinwa. “The news of his death was both sudden and saddening for me and I am sure for most members of our political family. Sen. Adeleke was a grassroots politician with a rich political background. He was hugely popular in his Osun, particularly in the three local governments in Ede, his hometown. He was a major leader of our party, the APC. His leadership and good counsel were still very much required when death came.

“The late senator and I shared mutual respect and affection. My path and his first crossed during the aborted Third Republic when we both belonged to the defunct Social Democratic Party.” In his reaction, Senator Iyiola Omisore said: “He was an illustrious son of Ede land and Osun State, a kind and generous person. But only God knows best. May Allah grant him Aljanah Firdaus.” On his part, the Ooni of Ife, said: “It was a rude shock to us at the Royal Court of Ife to receive the unpleasant news of the death of Senator Isiaka Adeleke just two days after we lost a very virtuous son, Mr Dipo Famakinwa. ‘’Famakinwa had tirelessly worked very closely with the Ooni’s Palace, Southwest state governments and other stakeholders for the much desired regional integration and development of Yoruba land through his Development Agenda For Western Nigeria known as DAWN Commission; and a Nigerian veteran actor, Mr. Olumide Bakare, popularly called “Oluwalanbe” who had also made contributions to the growth of the globally recognized Nigerian film industry. The noble efforts of these gentlemen will continue to rank them among our pride forever. “It is thus saddening that while we were not yet out of the shock of the untimely deaths of Dipo Famakinwa and Olumide Bakare, another big tree fell, our amiable Asiwaju of Ede kingdom, a Senator of the Federal Republic, His Excellency Isiaka Adetunji Adeleke who had in the past meritoriously served us as the first executive governor of the State of Osun.” The state House of Assembly in a statement, said: “Senator Adeleke a leader of leaders, a philanthropist per excellence, has made significant impacts in the lives of many young ones in Osun and Nigeria as a whole.

“There is no gainsaying the fact that the state has lost one of its most experienced politicians, whose death will no doubt leave a huge vacuum. “The state parliament valued the invaluable contributions of Senator Adeleke to the development of our state, and entrenchment of democratic tenets. No doubt, he will be greatly missed.” Meanwhile, the state chapter of the People’s Democratic Party, PDP, has declared a three-day mourning and an immediate suspension of all party activities across the state while the PDP flag will be flown at half-mast in honour of the former governor. Until his death, Adeleke was the Chairman, Governing Council, Nigerian Export Promotion Council, Pro-Chancellor and Chairman, Governing Council, University of Calabar, Nigeria.

It’s big blow —Osun APC All Progressives Congress in Osun State said: ‘Our party is in great sadness and shock because this is a monstrous blow to the APC which will be virtually impossible to overcome in the short run. In a statement from the party’s Directorate of Publicity, Research and Strategy in Osogbo, and signed by its Director, Kunle Oyatomi, the APC said, “we are momentarily shaken and short of words to respond to this tragic event appropriately, except to advise supporters, friends and family to summon courage, (however hard it may be), to pray for and mourn this fallen hero of Nigerian politics in general and Osun State in particular.