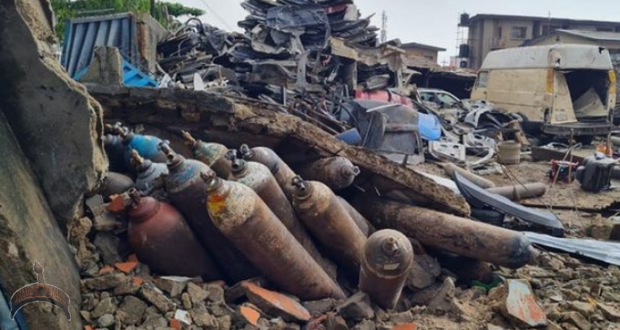 Posted by: Lolade in Local News Comments Off on Tragedy reported in Ladipo, Lagos: Five feared dead, others injured in gas explosion.

Officials of the Lagos State Fire and Rescue Service are currently at the scene of the explosion.

The director of Lagos State Fire and Rescue Service, Mrs. Margaret Adeseye said the incident was reported at 08:42 am via the State emergency reporting platform and was responded to by a combination of the State first and secondary responders.

Adesye said on arrival at the scene, it was discovered that it is an open space used for several activities including a beer parlour, mechanic workshop, spare parts sale, and gas shop amongst others while housing a makeshift structure.

Preliminary investigations to establish the fact of the incident continues and further discovery will be made public.

Previous: Photos: Nigerian Man In the U.S Weds His Bride In Beautiful Traditional Wears
Next: 51-250: Check out The Tyre Load Index Chart