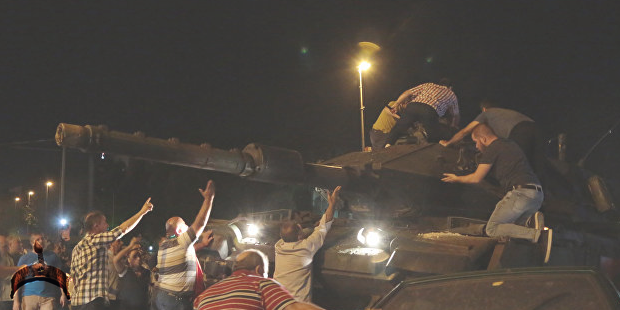 Posted by: BalogunAdesina in World News Comments Off on 60 People Killed in Turkey Amid Failed Military Coup

A failed military coup has left scores dead throughout Turkey including 60 civilian protesters who heeded the call of President Recep Tayyip Erdogan to resist the attempt to overthrow the democratically elected government.

UPDATE: According to NTV, Erdogan’s residence in Ankara has been attacked by military aircraft of the coup attempt participants. Earlier, a calm was reported in Ankara, military aviation stopped flying over the city. However, intense gunfire exchange resumed soon after.

The president said one chopper has been downed. Smoke is rising over the explosion site at the moment, NTV noted.

Alleged video of jets firing at Erdogan supporters in front of the Presidential Palace #TurkeyCoup pic.twitter.com/gpFel4d0Xz

On Saturday, Turkey faces the challenge of picking up the pieces after their democracy came under siege by a faction of military forces who sought to end the rule of President Recep Tayyip Erdogan citing the leader’s drift away from the country’s long-held secularist values.

The self-proclaimed “Peace Council” allegedly led by disgraced Colonel Muharrem Kose claimed to have seized control of the government for a short period of time. Kose, who was discharged from his duties in March 2016 for his links to the anti-government Gulenist movement that has been accused of attempting to form a shadow government within Turkey.

Kose’s Peace Council had taken control of the TRT news station, the bridges, and the Ataturk International Airport in what at one point seemed like a successful coup attempt.

President Erdogan countered the military force with an impassioned plea to his countrymen to take to the streets to oppose the military overthrow of the government with millions of Turks heeding the calls. The “Peace Council” responded by opening fire on civilians inside of Turkey by rifle, tank, and helicopter leaving dozens wounded throughout the country.

Fighting continues to take place in Turkey even as the Erdogan government has once again established full control over government buildings, the airport and most of the bridges. A live video above shows ongoing unrest in Ankara with a bridge set aflame.

A senior Turkish official also confirmed that 13 soldiers who tried to enter the presidential palace during the coup attempt have been arrested.

The situation appears to be coming under control with the first flight landing at the Istanbul Ataturk Airport since the start of the failed military coup in what is seen as a sign that the horror that has struck the country is rapidly winding down.

The Turkish Airlines flight is the first to land at the Istanbul Ataturk Airport (IST), the third largest in Europe, which was closed amid the military coup.

Turkish servicemen taking part in the military coup attempt in the country have started surrendering on one of the Istanbul bridges across the Bosphorus strait, NTV reports. There are about 50 servicemen who are surrendering as tanks have blocked traffic across the bridge.

According to President Erdogan’s office, 754 members of Turkey’s armed forces have been detained over military’s attempted coup.