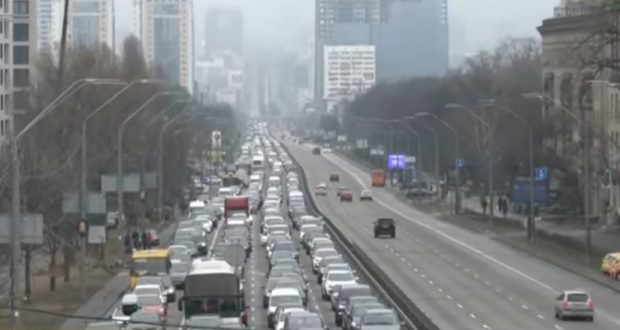 Day 2 of the Russian operation in the Ukraine –

Posted by: BalogunAdesina in Breaking News, World News Comments Off on Day 2 of the Russian operation in the Ukraine –

Today is a major day in the Russian military operation.  Why?

Because Russian forces are now on the outskirts of many major Ukrainian cities.  If yesterday was “standoff weapons” day, today is the first day when Russian forces can now begin to degrade Ukrainian artillery dispositions, engage Ukie armor and break through Ukrainian fortifications.  Today is also the last day for US PSYOPs to try to present a counter-narrative (Ukies heroically resisting, Russian dying in huge numbers, effective counter-attacks, etc.).

Yet we live in the smartphone with camera era and picture like this one tell the full story:

What you see in this picture are immense traffic jams of folks fleeing not Mariupol or Kramatorsk, but Kiev, the capital.

I now leave you with an open thread, please try to stick to FACTUAL INFORMATION and please refrain from prophecies about the future or stream of consciousness about the present.

One more thing: today Putin appealed to the Ukrainian soldiers and told them not to let the Banderistas to rule over them, he basically called for them to take power and negotiate with Russia.  Ukie generals need to think hard about what they will do next.

I will try to post an analysis of the day later today.

Previous: 17 Ebonyi Trafficked Teenagers Rescued In Ogun.
Next: Russian operation in the Ukraine – end of day 2