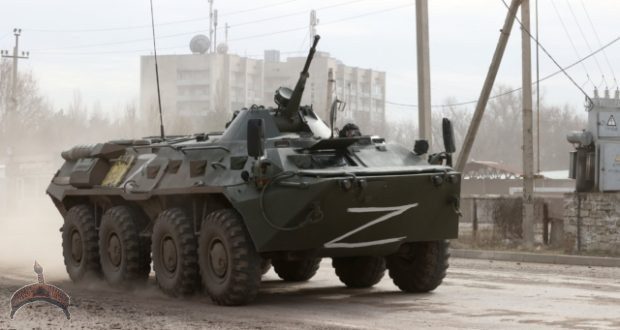 CRIMEA, RUSSIA - FEBRUARY 24, 2022: An armoured vehicle moves across the town of Armyansk, northern Crimea. Early on February 24, President Putin announced a special military operation to be conducted by the Russian Armed Forces in response to appeals for help from the leaders of the Donetsk and Lugansk People's Republics. Sergei Malgavko/TASS (Photo by Sergei MalgavkoTASS via Getty Images)

Posted by: BalogunAdesina in World News Comments Off on Sitrep Operation Z: How Goes The War 

From Saker Staff for Ooduarere via the Saker Blog

Zakharova:  Russia has completed preparations for retaliatory measures against Lithuania and the EU in response to the blockade of Kaliningrad and will apply them in the coming days.

It’s good to report that the EU now recognizes that they’ve lost the battle of the narrative.  https://www.rt.com/news/558748-borrell-g20-russia-sanctions/

NordStream 1 is now offline for annual maintenance until July 21st. Will Russia turn it back on?

Comment from Martyanov:  I also want to stress, again, that bar some obvious high-end involvement by Russian combat aviation, stand-off weapons, obvious state-of-the-art ISR and artillery, it is clear that by now the bulk of fighting on the ground is performed by LDNR forces and Russia’s National Guard (Rosgvardiya) and main forces, are being held in reserved and are used very sparingly. So, I guess Ukie 1 million-strong army is about to get acquainted with all the firepower of Russian Army, wink, wink.

The Russian hacker group RaHDIt and the Ukrainian “Beregini” were able to obtain secret operational documents about the actions of the Ukrainian army and the real situation at the front.  The hackers also managed to establish channels for receiving “from the Armed Forces of Ukraine” up-to-date information on the operational situation in the combat zone of the situation at the front.  According to hackers, American intelligence supplies Kiev with radar data, as well as satellite images, including the territory of Russia, which is then subjected to rocket and artillery attacks on civilians, a member of the RaHDIt hacker group told RIA Novosti.

Also take a look at Larry Johnston with estimates of Ukrainian attrition.  Understanding the Tactical Situation in Ukraine Based on the Russian MOD daily Briefings

This Military Summary report at end of day yesterday is interesting and talks of battles that we did not even know was happening.  (Also on Rumble for those who prefer that: https://rumble.com/v1bs479-ukraine.-military-summary-and-analysis-10.07.2022.html )

Kindly use as open thread and hammer the UkroNazis with up to date and clear information as the Sakerites usually do!

Previous: Kwankwaso: If I Cannot Get It, I Will Support Tinubu (Video)
Next: He Left the UK to Build the Biggest Drink Company in Nigeria