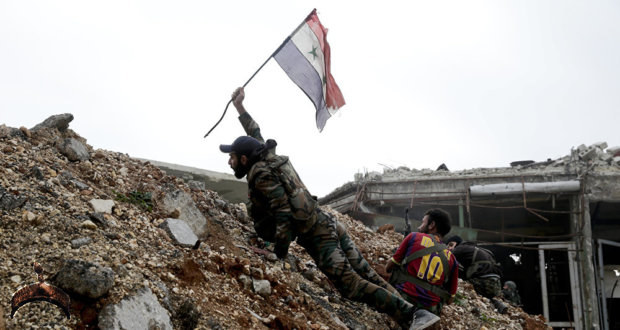 The Syrian Army has officially liberated Aleppo after ousting rebels from their last bastions in the eastern part of the city. Earlier on Monday, the Syrian Arab Army made significant advances leaving only three residential blocks in the hands of anti-government forces.

??✌️Joy and excitement of the people in Aleppo tonight as they celebrate the Syrian Army victory after 4 long years of battle pic.twitter.com/6hidFTlaYl

The rebels had little choice but to “surrender or die,” Lieutenant Gen. Zaid al-Saleh, director of Syria’s security committee, told reporters in the Sheik Saeed district.

Aleppo is going nuts over the liberation of Eastern part of Aleppo pic.twitter.com/QfyRghKoWY

The Battle of Aleppo lasted more than four years after fighting broke out on July 19, 2012. In 24 hours leading up to the victory, approximately 10,000 to 13,000 civilians fled the city, bringing the total number of refugees up to around 130,000, according to reports.

After local TV outlets reported the victory, residents flooded the streets, firing guns in the air in celebration.

Celebrations have started in Aleppo pic.twitter.com/0OZ81S3DeU

Throughout the battle of Aleppo, government forces repeatedly urged civilians to leave the area, organizing humanitarian corridors to arrange the safe passage of those who wanted to escape furious street battles. However, terrorist groups fighting in Aleppo forcibly prevented civilians from leaving the area whilst using them as human shields. “Civilians are being used as pawns and prevented from leaving,” UN spokesman Rupert Colville said recently.

Meanwhile, on Monday morning some 4,000 Daesh militants launched an offensive on Palmyra, Syria armed with heavy weaponry, armored vehicles, and tanks. Russian Foreign Minister Sergey Lavrov noted the offensive may have been “orchestrated,” while former UK ambassador to Syria said the US and its allies “didn’t lift a finger to try to stop [the Daesh offensive] happening,” despite having sophisticated and well-developed surveillance capabilities that likely could have detected the regrouping of Daesh militants and their vehicles en route to Palmyra.