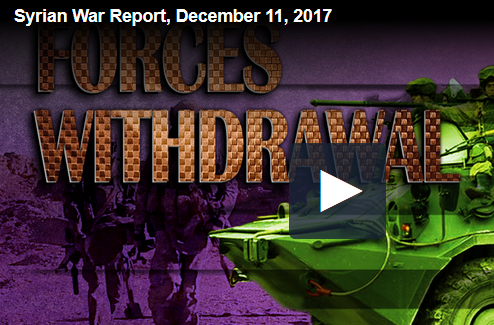 On December 10, the Syrian Arab Army (SAA) and Hezbollah launched a military operation in order to clear the desert area in eastern Syria from ISIS. According to pro-government sources, the SAA and Hezbollah liberated about 2,000 km in the area between the T2 pumping station and the city of al-Mayadin during the first day of the operation.

The US-led coalition believes that about 3,000 ISIS members remains in Iraq. If this is true, a notable part of them should hide in the Syrian desert. The liberation of this area will be an important part of the preparations for future anti-terrorist operations of the Iranian-Russian-Syrian alliance in Syria.

Recently, the US-backed Syrian Democratic Forces (SDF) also resumed their efforts to take control over the border with Iraq sparking clashes with ISIS. According to the ISIS-linked news agency Amaq, members of ISIS captured three positions from the SDF around the village of Hawi Abu Hamam as well as killed 14 members of the SDF and destroyed a Humvee and another vehicle of the SDF. Amaq also claimed that a SDF member was killed by an IED and two others by ISIS snipers south of the Omar oil fields.

ISIS was forced to intensify its operations against the US-backed forces because its members had been locked in the Syrian border area as a result of an advance of the Iraqi Army and the Popular Mobilization Units on the Iraqi side of the border.

On December 10, the SAA and the National Defense Forces liberated the village of Zafaria, Tell Boulus, Umm Turaykiyah, Rujm al-Ahmar, Shutayb, Mushayrifah and al-Hawiyah from Hayat Tahrir al-Sham (formerly Jabhat al-Nusra, the Syrian branch of al-Qaeda) in northeastern Hama. Thus, government troops deployed near the important village of Abu Dali, which is described as a mid-term goal of the SAA advance against Hayat Tahrir al-Sham (HTS) in the area.

According to pro-government sources, the Tiger Forces and their commander General Suheil al-Hassan will be the main striking force of the operation. Recently, Al-Hasan was spotted in the town of Khanassir.

Pro-HTS sources report multiple air and artillery strikes on positions of HTS across the entire area west of the Khanassir highway.

On December 8, Russia’s Foreign Minister Sergey Lavrov announced said the situation in Idlib remains “complex” and Iran, Turkey, Russia and Syria are working to launch a de-escalation zone and added “there are no plans with the United States on this specific region” because they would be “counterproductive”. The statement indicates that nobody will take into account opinion of Washington about the so-called moderate rebels if the Syrian-Iranian-Rusian alliance launches a large-scale operation against HTS.

On December 11, Russian President Vladimir Putin visited the Russian military airbase of Khmeimim in the province of Latakia and ordered the start of the withdrawall of Russian troops from the country. The president added that if terrorists gain upper hand in the country, Russia will carry out strikes that “they’ve never seen.”