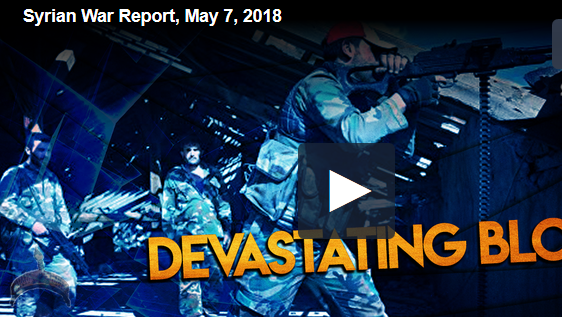 ISIS’ defense is rapidly collapsing in southern Damascus under a pressure from the Syrian Arab Army (SAA) and its allies.

Last weekend, government forces liberated the southern part of the al-Hajar al-Aswad district from ISIS terrorists and made a few important gains in the northern part of the district, including a local power station and the nearby points.

By May 7, the SAA and its allies have stormed northern Hajar al-Aswad, the southern part of Taqaddom and the northern part of the Yarmouk refugee camp. Fierce clashes are ongoing.

According to the ISIS-linked news agency Amaq, 10 government fighters were killed and a BMP-1 armoured vehicle of the SAA was destroyed in the clashes on May 4-6. However, this numbers of the SAA casualties can be hardly confirmed by photo or video evidence.

Reports once again appeared about negotiations between the ISIS leadership in Yarmouk and the SAA over a possible withdrawal deal for the remaining ISIS members. However, local Syrian pro-government activists believe that the deal will not be reached because of violent behavior of the local ISIS units.

On May 6, Iraq announced that its air force had carried out a new round of airstrikes on ISIS targets in Syria. The strikes hit ISIS positions around the town of al-Dashishah in the southeastern al-Hasakah countryside.

On May 5, ISIS attacked the Tell al-Sufuk crossing on the Syrian-Iraqi border from its positions in the province of al-Hasakah. The Iraqi actions could be a response to this attack.

Previously, the Iraqi Air Force carried out strikes against ISIS in Syria on April 19 killing 36 members and commanders of the terrorist group.

According to experts, this activity is coordinated with the Damascus government in the framework of the joint intelligence-sharing HQ in the Iraqi capital of Baghdad. This HQ involves Iraq, Syria, Iran and Russia.

On May 6, seven SAA officers were killed in an IED blast on the Damascus-al-Suwayda highway, between the villages of al-Surah and Buraq. No armed group has claimed responsibility for the attack.

Some sources have spread speculations that Israeli intelligence services may have been behind the incident because the victims of the attack were the operators of the S-200 air defense battery, which shot down the Israeli F-16 on February 10. However, no evidence has been provided to confirm this rumor.

Another, and the most likely version, is that the IED attack is a result of the growing tensions between the Syrian government and local arms and fuel smugglers, that are not happy with the growing efforts by Damascus to re-establish the law and order across the country.

At the same time, the Israeli media is fueling rumors that Iran may have been preparing a kind of military operation in response to the April 9 Israeli strike on the T4 airbase where some Iranian personnel were killed. One of them is a missile strike on Israeli targets from southern Syria may be conducted by the Islamic Revolutionary Guard Corps, Hezbollah or some other Iranian-affiliated forces.

Previously, Israeli officials claimed that Tel Aviv will respond with full force to any attacks on its objects from Syria. So, if the Iranian retaliatory strike takes place, it may lead to a significant escalation in the region.

Previous: See 9 Failed McDonald’s Products (Photos/Video)
Next: 9 Questions You Need To Ask Yourself Before saying yes To Unprotected Sex – Meme