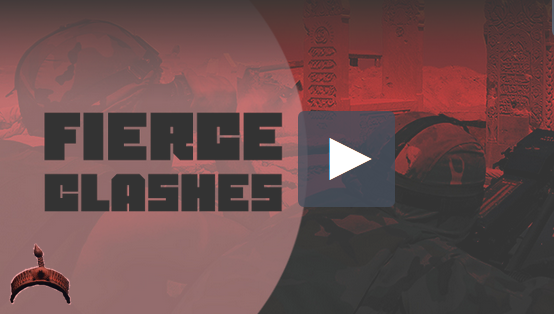 On Wednesday, a fierce fighting between the Syrian Arab Army (SAA) and ISIS continued in and near Deir Ezzor city.

ISIS made few attempts to cut off a corridor between the city and the government-held area near the 137th Brigade Base and to re-establish a siege on Deir Ezzor. ISIS claimed that it successfully used a SVBIED and caused large casualties to the SAA Tiger Forces. However, the terrorists failed to cut off the corridor.

On Tuesday, the Tiger Forces officially broke the ISIS siege on Deir Ezzor, according to the Russian and Syrian defense ministries. The Russian Aerospace Forces and Special Operations Forces actively supported the advance. The Admiral Essen frigate of the Russian Black Sea Fleet even launched Kalibr cruise missiles on ISIS targets near Ash Sholah.

According to the Russian Defense Ministry, the missile strike killed dozens of terrorists were and destroyed ISIS command posts, a communications center, a facility repairing terrorists’ armored vehicles, arms and ammunition depots.

In a separate statement, the ministry added that government assault groups destroyed over 50 ISIS vehicles belonging during the clashes near Deir Ezzor.

Another government striking force focused on clearing at the Sukhna-Deir Ezzor highway from ISIS. On Tuesday, pro-government sources say that the SAA re-entered the Kobajjep a after repelling few ISIS counter-attacks. However, on Wednesday, the area faced another wave of fierce clashes and appeared to be contested again.

According to the ISIS-linked news agency Amaq, ISIS members destroyed at least 5 SAA vehicles belonging, including a BMP vehicle, in the area.

If ISIS is not able to cut off the government-held corridor west of Deir Ezzor soon, the terrorist group will inevitably loose the battle for Deir Ezzor to the SAA.

Meanwhile, government forces took advantage of the ongoing battle for Deir Ezzor and opened a front against ISIS near Sukhna. The SAA and its allies advanced in the direction of Sarayim village southeast of the Doubayat gas field.

The liberation of the village will open an opportunity to conduct a larger advance in order to take control over the Doubayat gas field and to secure the southern flank of Sukhna.

Local sources report that ISIS has little resources to counter the SAA advance there because it has re-deployed large forces to Deir Ezzor.