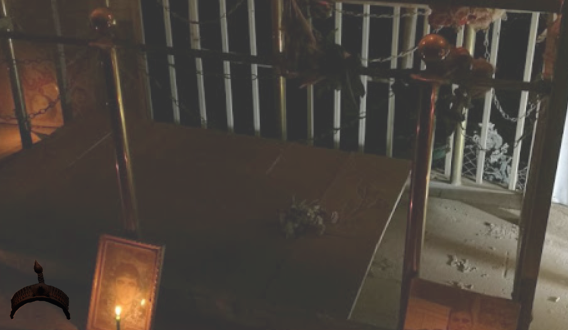 Tikrit & Najaf: the agony and the ecstasy

Posted by: BalogunAdesina in World News Comments Off on Tikrit & Najaf: the agony and the ecstasy

TIKRIT and NAJAF, Iraq – Nothing, absolutely nothing prepares you to revive, on the spot, the memory of what will go down in history as ISIS/Daesh’s most horrid killing field in Iraq or Syria since the death cult stormed across the border in the summer of 2014; the Speicher massacre of June 12, 2014 – when almost 2,000 Iraqi army recruits were assassinated in and nearby a former Saddam Hussein palace on the banks of the Tigris near Tikrit.

As Dylan would sing it, “ain’t it just like the night to play tricks when you’re trying to be so quiet”. In 2003, a few days after Shock and Awe and the fall of Baghdad, I took the road to Tikrit for Asia Times to survey Uday Hussein’s bombed palace as well as his father’s birthplace, only to return 14 years later to one of those palaces turned into a house of horror.

The Speicher killing field was gruesomely staged – and filmed – by Daesh only a few days after the fall of Mosul. Daesh’s Salafi-jihadi goons were feted as “liberators” by many a Sunni tribe around Trikrit just as 10,000 Iraqi Army recruits from different provinces, mostly Shi’ites, were being trained at an Air Force academy nearby.

With Daesh fast advancing and the Iraqi Army at the time dissolving by the minute, the youngsters were ordered to switch into civilian clothes, leave their weapons behind, and go home. As they were literally walking back to their home provinces they ended up falling in a lethal Daesh trap. Bearing echoes of the Nazi era, the youngsters were divided into Sunnis and Shi’ites – with the Shi’ites bundled in trucks described as their “transportation” home. Instead they were taken to what would become a killing field framed by decaying Saddamist architecture.

The horror, the horror

It’s late evening on a windless Monday – and I’m standing at the eerily silent exact spot of one of the killing field’s sites, captured by a Daesh propaganda video in part of this harrowing footage. Hayder Atamiri, the official representative of the Tikrit massacre committee, almost in tears, swears, “all the tribes in the area took part in this”. He’s convinced the massacre took place in “an icon of Saddam” and it was “revenge for Saddam’s death”.

Daesh leaders presided over a gruesome ritual from a balcony as three jihadis summarily killed the recruits with a bullet in the back of the head. Today, discreet shrines with pictures of the dead surround the balcony. So far 1907 victims have been catalogued – many from Iraq’s Shi’ite-majority and/or poorer provinces (for instance, 382 from Babylon, 254 from Diwaniya, 132 from Karbala, 119 from Diyala, 99 from Najaf.)

Atamiri says locals at the time found roughly 90 bodies “and the rest drifted away” along the Tigris. Nearby, Daesh goons “dug trenches, used bulldozers and covered the bodies with rocks.” No less than 14 mass graves have been found, 13 of them “already excavated.” Two more mass graves were identified “but there’s no proper storage for the remains yet.”

Other figures by the Iraqi Ministry of Health list 1,935 dead – with 994 bodies found, 527 fully identified, 467 under examination and still 941 missing. A systematic search for human remains only started in March 2015 – eight months after the massacre – when Tikrit was finally recaptured by Baghdad’s forces.

Compared with Ramadi or Mosul, Tikrit suffered very little damage as it was reconquered largely by Hashd al-Shaabi, a.k.a. the People Mobilization Units (PMUs), called into action by Grand Ayatollah Sistani’s 2014 fatwa. Atamiri is adamant “Hashd was the only force liberating Tikrit.” And crucially these fighters were not Shi’ites; they were Sunnis.

Yezen Meshaan al-Jebouri, the son of the governor of Tikrit, Raed al-Jebouri, head of the Salahuddin PMU brigade – and a member of the very prominent Sunni Jebouri family, which was historically inimical to Saddam Hussein, had previously confirmed to me in Baghdad; “Local tribal leaders encouraged the work of Hashd. They understood we believe in Iraq’s political system.” Almost a third of the PMU force – a total of around 20,000 fighters – is Sunni. As al-Jebouri stressed, “Tikrit returned to its people. And Tikrit University was protected.”

In the complex Iraqi tribal chessboard, the local consensus is that certain Wahhabi-tinged jihadis were part of the Speicher massacre, but that did not translate into a collective Sunni endeavor. Daesh killed Sunnis as well, and Sunnis helped at least a few Shi’ites to flee.

Atamiri is adamant, “only Hashd stood with us. Now they are maintaining peace and won’t allow any extra-judicial revenge”. He frames the whole battle ahead as the need to “eradicate extremist ideology” and notes that some Daesh jihadis, when captured, “tried to show remorse, but that is very difficult for us to believe. And some of them are now living in European countries.”

Families of the murdered youngsters silently exhibit photos of their sons and ask “international bodies to do something”. They all agree; the response from the “international community” has been shameful. Still, the Tikrit massacre committee vows to keep the memory of Speicher alive. Mothers of victims have been to Geneva to ask for help as well as mental health support for quite a few families, and plan to visit again in June 2018.

This has been one of Iraq’s most devastating nightmares of the past three decades. After such sorrow, what forgiveness?

It’s possible. From agony to ecstasy. There could not be a more radical contrast between darkness and light than taking the road to Najaf – the Iraqi Vatican, and fourth holiest city in Islam – and Karbala, alongside millions of black-clad pilgrims during the annual celebration of Arba’een, the “40th Day” of the martyrdom of Imam Hussein.

Countless tents, tea shops and impromptu restaurants, festively decorated, line up the road to Najaf and Karbala. Suddenly we’re thrown into the vortex of the largest gathering of humans in history, way outdoing the annual Hajj pilgrimage to Mecca; nearly 20 million people as opposed to about 1.5 million. Here is the record of my own pilgrimage in 2003 – a few days after the fall of Baghdad.

To be inside the Imam Ali shrine – in all its glimmering, refracted glory – is a religious experience in itself, the apotheosis of Shi’ite rituals of redemptive suffering (readers interested to know about Arba’een may consult scholar Seyyed Hosein Mohammad Jafri’s book The Origins and Early Development of Shi’a Islam.)

The Imam Ali shrine, in all its splendor, is managed, at the highest instance, by the marja’iya – the religious sources of emulation, mostly personified by Grand Ayatollah Sistani, whose office is in a narrow alley nearby; and in practice, by a foundation. According to its secretariat “more than 20 million people are registered in the shrine”.

Najaf welcomed refugees of the fight against Daesh by the tens of thousands; Sunnis from Anbar province, Christians, Shi’ite Turkmen from Tal Afar; “Now many are back to their communities”. The PMUs are incredibly popular – their white flags fluttering everywhere alongside black Imam Hussein and multicolored Imam Ali banners.

The shrine is proud to at least assist in helping victims from the Speicher massacre; “The government may be shorthanded”.

I was in Najaf last week, at the start of the pilgrimage. But the apex of Arba’een is today, November 10. And that happens in the most extraordinary of historical circumstances; the final defeat of Daesh.

The Syrian Arab Army (SAA) announced on Wednesday it had captured Albu Kamal, the last town held by Daesh in Syria – after Iraqi forces captured its sister town across the border, al-Qaim. In Baghdad, before leaving to Najaf, I was assured by a top PMU commander that al-Qaim would be retaken “in a matter of days”: four, in the end, to be exact.

None of this is getting traction in Western media. The final victory on the ground against Daesh, in Syria, was accomplished by the Syrian army with help from Russian strategy and air power, and in Iraq by the Iraqi army and the PMUs. Syrian and Iraqi forces are symbolically reunited at the border.

Meanwhile, at this very moment, millions of souls – Iraqis, Iranians, Afghans, Pakistanis, northern Africans, Central Asians, Persian Gulf nationals – are being soothed via the massive, cathartic walk from Najaf to Karbala. A pilgrim captured the spell – spiritual redemption merging with political statement – as he told me, with the flicker of a smile, the walk is also “a protest against terrorism”.