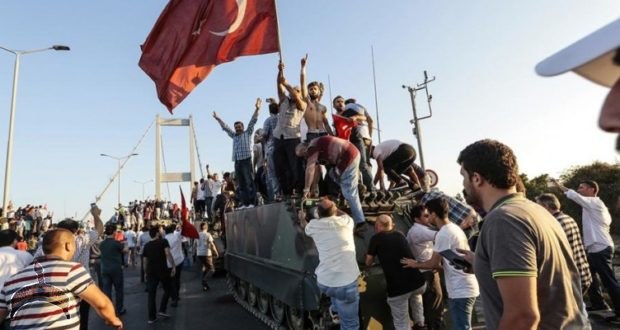 Andrew Korybko left a link to his latest Turkish analysis in our comments section. I have copied the article in full here. I communicated with Saker and it was decided that the article should be published under commenter’s corner for greater reader exposure. Original link http://katehon.com/article/post-coup-turkey-will-be-distinctly-eurasian

The aftermath of the failed US-directed and Gulen-inspired coup attempt is already making itself clear, with Prime Minister Yildirim stating that Turkey might reinstate the death penalty to deal with the plotters. This statement is just as symbolic as it is substantial, since not only does it disprove allegations that Erdogan “planned this” himself for some Machiavellian purpose, but it also indicates that Turkey has decided to shun the West. The EU is strictly against the death penalty and would immediately halt the decades-long drawn-out accession negotiations with Turkey as a result.

Erdogan correctly calculated that the EU wants nothing to do with his country and that Turkey is unable to milk extra benefits from the bloc after the Brexit referendum, so he recalibrated his state’s foreign policy to align with the multipolar world instead. This saw the recent news of Turkey belatedly declaring Al Nusra a terrorist organization and opening up secret reconciliation talks with Syria, despite still repeating the “face saving” refrain of “Assad must go”. Furthermore, Turkey is part of Russia’s nascent coalition of regional powers opposed to the US’ daring attempt to militantly carve out the “second geopolitical Israel” of “Kurdistan”. Not only that, but Turkey are Russia are also back on track for reimplementing the Balkan Stream megaproject, which when paired with China’s complementary Balkan Silk Road high-speed rail project from Budapest to Piraeus, is perhaps the most ambitious multipolar outreach to Europe that has ever been attempted.

The US stands to lose many of its strategic gains in the past decade if any of these multipolar counteroffensives succeed, let alone all of them, which is why it desperately masterminded this last-ditch attempt to safeguard its unipolar hegemony. Try as it might, though, it was patently obvious what the US was doing, and even Syria’s close Iranian ally – which many might otherwise think would have a relative interest in Erdogan’s downfall – voiced its support for Turkey’s “brave defense of democracy” via a tweet by Foreign Minister Zarif. Despite this statement being somewhat of an oxymoron, it proves that the Syrian government’s most active on-the-ground ally understands the greater interests at play here and is thus standing behind Erdogan (however shocking this might seem to many) because of the bigger picture that was just elaborated on above.

As a closing forecast, it’s very likely that Turkey will accelerate its multipolar pivot and finally embrace its Eurasian destiny, though not without forthcoming American-improvised Hybrid War challenges – a renewed Kurdish insurgency, left-wing terrorism, a Color Revolution, Daesh attacks, maritime proxy hostility via Greece, engineered provocations with Turkey’s other neighbors, a civil war, and/or another feeble coup attempt — in order to throw the progressively Islamifying and Muslim Brotherhood-inspired state into such chaos that it becomes impossible for its new multipolar partners to make any substantial use of its territory in their joint quest to dismantle the unipolar world order.