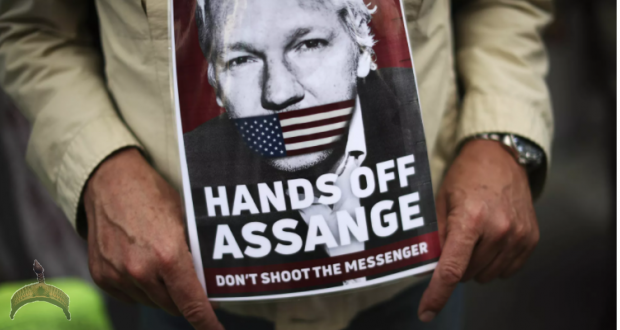 Posted by: BalogunAdesina in World News Comments Off on UK High Court Rules Assange Can Be Extradited to US

In January, a British judge ruled that WikiLeaks founder Julian Assange should not be extradited to the United States because of the strong risk that he might commit suicide in prison there. The 50-year-old Australian national faces life in prison if convicted in a US court on espionage charges.

The US government has won its appeal in the London High Court to have Julian Assange extradited to the United States, with a judge overturning a lower court’s decision to block the extradition.

“The court allows the appeal,” Lord Justice Timothy Holroyde announced in a Friday hearing.The decision opens the door for Assange’s extradition, but his defence attorneys maintain the right to appeal the Court of Appeal’s verdict.

Mr. Assange’s fiancee, Stella Moris, called Friday’s ruling a “grave miscarriage of justice,” and vowed that “we will appeal this decision at the earliest possible moment.”

Holroyde’s decision follows a ruling by a lower court earlier this year blocking the US government’s extradition request, citing Assange’s mental status and fears that he may attempt to take his own life in a US prison.Lawyers representing the US had dismissed the earlier ruling, suggesting that Assange “has no history of serious and enduring mental illness” and that there is no evidence that he may attempt to harm himself.

The US government has also assured London that Assange could serve any prison sentence he receives in a US court in Australia.Assange faces 17 espionage charges, and one charge of the misuse of a computer over WikiLeaks’ publication of thousands of military and diplomatic files, including videos exposing US war crimes in Iraq. If convicted, the journalist and activist would face up to 175 years in prison.

Assange’s defenders view the attempted prosecution of the WikiLeaks founder as an attack on press freedom, with dozens of prominent journalists, civil liberties and human rights groups fearing that efforts to prosecute him may be a test case to persecute any journalist, dissident or media organisation that the United States happens to disagree with or feel threatened by.Reporters Without Borders blasted the London court’s Friday ruling, with Secretary General Christophe Deloire tweeting that the decision would “prove historic for all the wrong reasons.”

“We fully believe that Julian Assange has been targeted for his contributions to journalism. We defend this case because of its dangerous implications for the future of press freedom around the world. It is time to put a stop to this more than decade-long persecution once and for all. It is time to free Assange.

This decision is announced the day when the Nobel Peace Prize is awarded to two journalists and when 111 governments are invited to the US-led Summit for Democracy. There could not be a bigger symbol of contradiction,” Deloire wrote.Mr. Assange has already faced a form of imprisonment for nearly a decade, taking shelter in the Ecuadorian Embassy in London in June 2012 and claiming diplomatic asylum amid fears of political persecution and extradition to the United States via Sweden, where two women had accused him of sex crimes.

The allegations against him were eventually dropped, and Assange denied any wrongdoing throughout the affair. He was dragged out of the Embassy by British police in April 2019 after Ecuadorian president Lenin Moreno renounced the WikiLeaks founder’s asylum status, allegedly after making a backroom deal with Washington, and jailed by British authorities for breaching bail in the defunct sex crimes case. Assange has been held in Belmarsh Prison – a British maximum security prison ordinarily reserved for the likes of murderers and terrorists, ever since.

Previous: FFK: Precious Chikwendu’s Interview About The Abuse In Her Marriage (Full Video)
Next: Former Super Falcons’ goalkeeper, Ayegba, becomes a bus driver in the UK.

By Ramin Mazaheri for Ooduarere via the Saker Blog (This is the first chapter in a new book, France’s Yellow Vests: Western Repression of the West’s Best Values. Please click here for the article which announces this book and explains its goals.) It would be boring to defend the French Revolution by showing the moral and intellectual worth of its left spectrum – of Danton and Robespierre, Marat and Babeuf. What’s far more interesting is to examine the right’s assessment and criticisms of ...