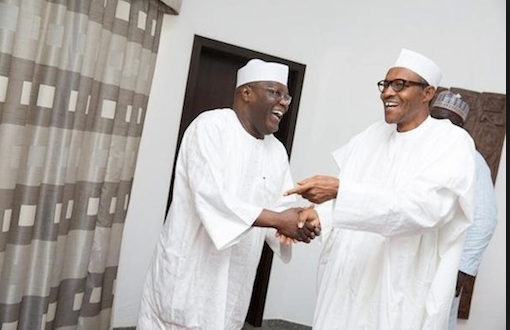 Posted by: Lolade in Breaking News, Politics Comments Off on Eto E ma ba yi (Bringing your attention to This!)

They say Atiku owns 16% of Intels which is a drain on the Nigerian economic system, and in fact a treasonous operation.

AND THEY ARE BLOODY RIGHT.

So you would expect that the government which rose to power on the back of the putative ability to fight corruption would fucking do something about treason!

They had four years. What did we get? Atiku enjoying his loot. EFCC making Nollywood flicks about discovering hidden stashes of dollars without owners. NOT ONE PERSON WAS PROSECUTED AND PUT ON JAIL FOR THOSE BAGS OF CASH DISCOVERED.

What we did get however is clear.

Babachir and other criminals and looters get the protection of their Ayatollah once they join the APC. And offer them some of the loot to do what they like with.

Now what is really interesting is the Sainthood of Jagabandit. I mean this man recalled Chagouri and Chagouri, declared enemies of state by OBJ who ran them out of the country for actual treason!

And Alpha Beta claims a lion share of the tax generated in Lagos just like Intels claim the loots from the ports.

In fact, the Tinubu thing goes deeper, his control of Lagos economy, which is the equivalent of Kenya and Benin Republic economies put together, is total.

Just have a look at the debt profile versus the rate of development in relation to other cities like Kigali, Cairo, Rabat, Joburg, Addis Ababa, etc and you’d realise the scale of the heist going on there.

But it’s election time and they hold one thief up to you as the villain and the other as the hero.

What is clear is that you lot, the unthinking citizens are the pawns of the game.

I just thought to bring your attention to that.

Previous: Atiku ‘Predicts What Will Happen In Nigeria If Buhari Is Re-elected’.
Next: Shocking!! Crowd In PDP Gombe Rally Chat “Sai Buhari” (Video)