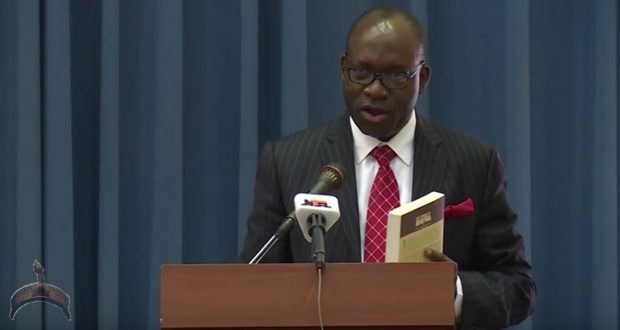 Posted by: chucks in Politics Comments Off on Insecurity In Anambra Politically Motivated , Says Soludo

The All Progressives Grand Alliance candidate for the Anambra gubernatorial election, Prof. Charles Soludo, has said the insecurity challenges in the state is politically motivated.
Soludo stated this during the Anambra Gubernatorial Debate organised by Arise TV on Monday, noting that some individuals hope the situation would give them a political advantage.

The former Governor of the Central Bank of Nigeria also stated that insecurity in Anambra State is a recent phenomenon, claiming that his opponent from the All Progressive Congress, Andy Uba might have an answer to the insecurity challenges that persist.

He noted that while the state’s security architecture was vested in the Federal Government, the incumbent governor has risen to the challenge of securing Anambra.

“The insecurity in Anambra is a recent phenomenon. Very recently and I think my brother on the right-hand side[Andy Uba] when he responds might be able to tell a little more about part of the reason this is happening.
But Anambra has remained largely, a safe haven: real estate booming, businesses booming, hospitality industry and so on and so forth.

“And recently, it is a challenge and the Governor as the Chief security has risen to the challenge. By the way, all the security agency as you know, are within the purview of the Federal Government but we’ve got a security architecture in which the federal forces have been working in tandem with the local vigilantes,” he added.
Copyright PUNCH