Posted by: admin in News From Nigeria, Politics, World News Comments Off on UDAR Party of Ukraine: Facts and Details 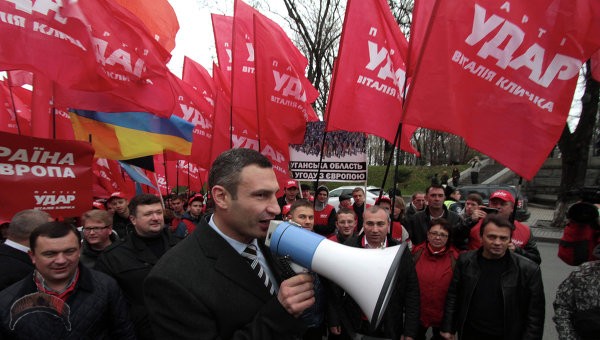 The Ukrainian Democratic Alliance for Reform (or UDAR, this means punch in English) is really a center-right pro-European political party in Ukraine led by professional heavyweight boxer and current mayor of Kiev Vitali Klitschko.
The party was formed in April 2010, replacing the Nova Krayina (New Country) Party.

UDAR’s platform is focused around transforming Ukrainian politics in accordance with “fundamental European values” and carrying out the social and economic reforms that will enable Ukraine to generally meet European standards.
Regarding the existing Ukrainian crisis, the party stand for the end of the war in the Donbas without losing “an individual section of Ukrainian territory”, in line with the party website.

Currently, there are over ,000 party members, with 41 members elected to the Ukrainian Parliament, the Verkhovna Rada, in the VII convocation (as of October 15, 2014).  Since September 2013, UDAR has held observer status in the European People’s Party.
The UDAR Party has determined to guide current President Petro Poroshenko’s Block party in the parliamentary elections scheduled for Sunday.