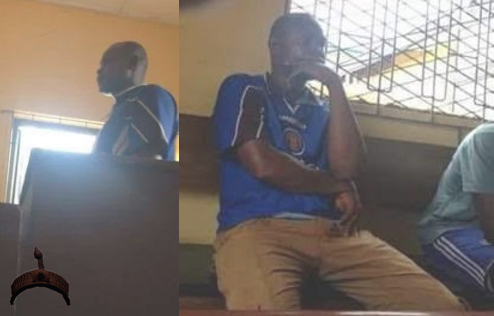 Man Who Named His Dog Buhari Dragged To Court (Photos)

Posted by: Lolade in Breaking News, Metro life Comments Off on Man Who Named His Dog Buhari Dragged To Court (Photos)

40 year old Joachim Chinakwe who named his dog Buhari was today charged under the watchful eye of a Sango Magistrate Court, Ogun state. He was captured at Ketere zone of Sango Ota on August 13th after he was reported by a neighbor for naming his pet puppy Buhari.

As per the charge sheet, Joachim who is a trader, was said to have kept out of mischief in a way that could bring about breach of peace by naming his puppy Buhari and parading same at the Hausa segment of Ketere business sector in Sango area.

The charge read in part

“That you, Joachim Iroko ‘m’ (a.k.a Joe) and another still at large on the13th Day of August, 2016 at about 1730hrs at Ketere area Sango, in the Ota Magisterial District did conduct yourselves in a manner likely to cause breach of peace by writing a name BUHARI on a dog and parading same in the Hausa section of Ketere market Sango Ota and thereby committed an offence contrary to and punishable under section 249(d) of Criminal Code Laws of Ogun State of Nigeria, 2006.”

Joachim pleaded not guilty to the charge. He was granted a N50, 000 bail, with two sureties in like sum.

Previous: If GEJ Had Continued, Nigeria Would Have Been For Sale By Now – Fr. Mbaka [VIDEO]
Next: Lady Dumps Baby Girl At The Main Gate Of Govt. College Katsina