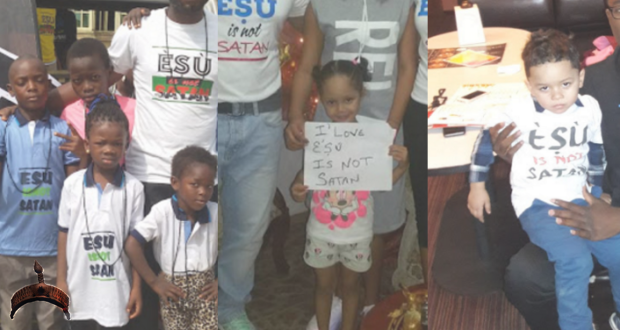 To throw more light to the issue of #EsuisNOTSatan

Posted by: Lolade in Breaking News, Culture Comments Off on To throw more light to the issue of #EsuisNOTSatan

Esu is one of the Ori in Orisa tradition. Who followed other Irunmole from heaven to earth. He was blackmailed by mistakenly regarded him as Satan in Quran and Bible when Bishop Ajayi Crowder translated Bible from English to Yoruba version.

Esu is a fundamental Orisa and of great importance in Yoruba land.
Esu is primarily a special relation officer between heaven and earth. Who makes final recommendation to Olodumare for the latter approval.
Though, Orunmila is assigned the duty of listening to the voice of Olodumare through divination and declare his will to the world by the assistance of Esu.

We have different type of Esu such like : Esu Awure (good luck charm), Esu ebo (that send sacrifices to heaven), Esu ija (to fight enemies), etc
Ifa says in Ejiogbe :
I look at my right side
Weed tight my leg
I look at my left side
Weed tight my leg
I don’t know the road…
Cast divination for
Four hundred and one
Irunmole when they were going to visit Olokun for celebration
They know that they will get enough money as they are coming back, they planned not to inform Esu. Not knowing that Esu has already known. So,
When they reached half way the road turned to about hundred they were not sure of the real road so they turned back.
In the following year They asked Orunmila what to do, He divine Ifa for them and told them to go with Esu.
They complied and Olokun bless them.
Since then they want Esu to be in front of them. In most shrine, in the Ifa initiation…. Esu usually in front

Previous: What happened and why
Next: Escalation Looming? Israel to Crush Syrian Air Defense if Jets Targeted Again

Why did you quit your good job to serve ‘Esu’? #EsuIsNotSatan

Discussion on Esu continues. An employed graduate, a Christian, asked his friend, also a graduate but a Babalawo, “why did you quit your good job to serve ‘Esu’ “? The Babalawo answered, ” I get comfort and goodness from ‘Esu’. The banker, the employed, said, “you must be stupid to do that in this century “.Years later, the banker lost his job and was thrown out by his landlord. He rushed to the Babalawo who now owns a house with ...