Don't Miss
Home / News From Nigeria / Breaking News / What If Zuckerberg Were A Nigerian Atheist? 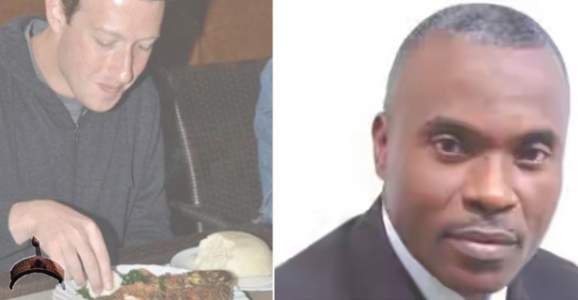 What If Zuckerberg Were A Nigerian Atheist?

Posted by: Lolade in Breaking News, Foreign Comments Off on What If Zuckerberg Were A Nigerian Atheist?

THERE ARE three American brands that Nigerians patronise hugely: Facebook, Microsoft, and Apple.

Mark Zuckerberg, co-founder of Facebook, is an atheist; Bill Gates, founder of Microsoft, is an agnostic (neither believes nor doubts the existence of God); Steve Jobs, founder of Apple, was a Zen Buddhist. Yet, Nigerians love them and patronise their products hugely.

If these three men were Nigerians who professed atheism, agnosticism and Zen Buddhism publicly, how would many Nigerians react to them?

It seemed Aso Rock was not happy that the young billionaire visited Nigeria without paying a visit to the Nigerian seat of power; for a day after leaving Nigeria for Kenya, he returned to Nigeria and visited Abuja, took groupies with President Muhammadu Buhari and Vice-President Yemi Osinbajo. The President and the Vice-President were full of smiles in the pictures they took with Zuckerberg.

In Nigeria there are ONLY two religions: Christianity and Islam. Other religions are treated with contempt by most Nigerians. Even the government at all levels discriminates against other religions. That is why different levels of government sponsor only Christian and Muslim pilgrims. The Federal Government also gives Christians and Muslims special concessionary dollar rates during pilgrimages, while leaving companies that manufacture goods to source their dollars at the prevailing market rates, leading to the shutting down of many companies and loss of thousands of jobs.

Imagine if a person was told to pray at a gathering of Nigerian politicians or business executives in Abuja and the person began to call on “Amadioha” or “Ogun” and the ancestors. Those in attendance would not wait for him to finish before protesting and stopping the prayers. But if the person had prayed the Muslim way, the Christians would say “amen” at the end of the prayers, even though they don’t understand the Arabic spoken by the Muslim and don’t share the beliefs of the Muslims. In the same vein, if a Christian had prayed, the Muslims would say “amen” even if the Christian ended his prayer with “through Jesus Christ our Lord”: it would not matter that Muslims don’t believe in the godhead of Jesus Christ.

Therefore, the Nigerian Christian and Muslims have been conditioned to view each other’s faith as acceptable religion, even though that has not stopped the decades of religious violence that has marked the religious practice in Nigeria in the country. Any other religion outside these two is viewed with contempt or outright opposition. Professing a lack of belief in God is even given worse treatment.

An atheist is viewed in Nigeria as an embodiment of the devil and everything evil. He is believed to be an enemy that must not be associated with to avoid infecting others with the “curse” he carries. He is not expected to succeed in life. He is not expected to be wealthy. Even if he acquires wealth or success “by mistake,” he is expected to lose it soon, because it is seen as a gift from Satan. Any tragedy that befalls him is seen as a punishment from God, and he gets little or no sympathy. Girls would not be eager to marry him because he is an atheist or has a different religion from Christianity and Islam. If he has a product or service, many would refuse to patronise him, so as not to contract the “atheist curse” that they believe he bears.

But Nigerians hypocritically drool over Zuckerberg. They want to be like him: young, handsome, intelligent, super-rich. They forget that he is an atheist. When they wake up, the first thing they do is to open their phone and visit Zuckerberg’s business, Facebook, to read the latest gossip and news and exchange pleasantries and quarrels with friends and foes. If they are not on Facebook, they are on WhatsApp or Instagram, also owned by the same atheist, Zuckerberg. If Zuckerberg were not married, many would throw themselves at him even before he proposed. If he were to even decide to settle in Nigeria and become a polygamist, many Nigerian ladies would gladly accept to be second, third or 20th wife, if he decided to acquire a harem, despite all his atheism.

In the same vein, Nigerians resume in their different offices and spend all their day solving problems with Microsoft and making money through it. They do not remember that Bill Gates, the founder of Microsoft, is an agnostic, and that his faith or lack of it has not prevented him from being the world’s richest man and one of the greatest philanthropists.

Similarly, Nigerians flaunt their iPads and iPods and iPhones without remembering that Steve Jobs was a Zen Buddhist, who – as reported by his authorised biographer, Walter Isaacson – renounced his Christian faith after seeing the July 1968 Life magazine with the cover photograph of starving Biafran children. In Nigeria, Zen Buddhism would be seen as “idol worship” because of the statues of Buddha. If Jobs were a Nigerian and had died of cancer, many would have sneered that “God had visited him with cancer for rejecting Christianity and embracing idolatry.”

However, because these people are not Nigerians, whatever they do does not matter to many Nigerians. Just like it does not matter if a 25-year-old CNN broadcaster calls our President – past or present – “Mr Buhari” or “Mr Jonathan” or “Mr Obasanjo.” Our President so addressed would accept it with a smile. But let a Nigerian broadcaster address our President – past or present – as “ordinary Mr” and all hell would be let loose.

“How dare you address a whole army general or PhD holder as ordinary Mr?”