Almajiri (singular), Almajirai (plural), as they are called in Hausa land has been a long tradition of learning Islamic by leaving your locality to another far away Hausa state to learn. 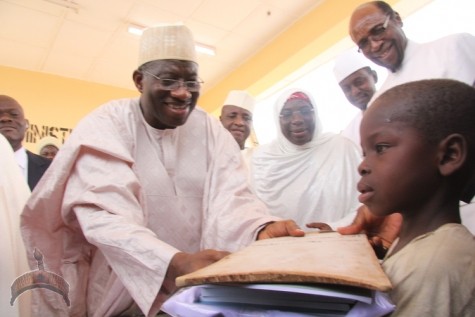 Usually, Almajiri is sent away at childhood, he will be handed to his teacher at a very young age. His father will send him with his sustenance to the school.

Nigeria is not the only country to having Almajirai in the world. Sudan, Niger, Egypt, Tibet, Burma, India etc all have Almajarai with different names they are called in their locality. What makes Nigerian Almajirai totally different from all others is because of the fact that, government and all other relevant stake holders have not been giving then the necessary attention and assistance they needed. Until the coming of President Jonathan, I don’t know if there was any other federal regime whether civil or military that approach them with any assistance.

It will be recalled that, since ending 2012, President Good luck Jonathan has promised to assist the Almajirai by building special schools that include both Islamic and western education fro them. The sum of over 1 billion was said to have been directed for that purpose. Unfortunately, two years after, that has not been achieved. The Almajirai are still rooming about scavenging for food, shelter and clothes. Even the schools constructed in Katsina near Army barrack, and Sokoto near Rima basin development commission are not put to use. The buildings have been completed, but the schools remain closed and locked.

According to some Almajiri teacher in Katsina, both the local, state, and federal government have not shown any genuine intention to help the Almajirai. He also lamented that they don’t want to be moved outside their cities as intended by the government.
The situation of Almajirai is treble. Their rooms are over crowded. Over 5 hundred of them share a single toilet. They walk bare footed. They hardly have food twice a day. The people and government in northern Nigeria should make it in their budgets, a special allocation for Almajirai and how to better their lives.

I call on the states, federal government to investigate the stalemate and ensure that the voted money are utilized judiciously.