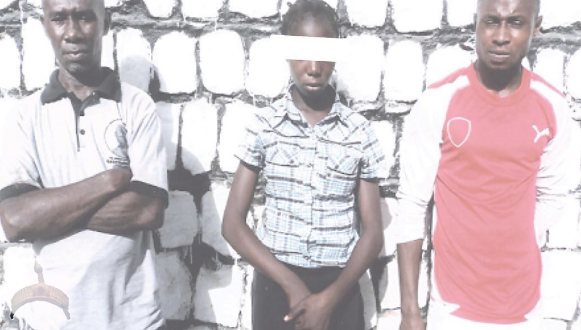 Posted by: Lolade in Breaking News, Local News Comments Off on I didn’t know I was HIV+ when having sex with her – Rapist of 12-year-old girl

Emmanuel Nwachukwu, a 52-year-old father-of-four, stated this while being paraded by the police in Minna, Niger State, along with the second suspect, Chinedu Andrew, 22. The duo were accused of raping their 12-year-old Primary Six, neighbour.

According to Nwachukwu, “I have tested positive to HIV/AIDS, but before the test was conducted, I did not know I had the virus. I didn’t rape the girl, I made love with her. She told me she was about 15 years old, one afternoon in November 2015, she came to my residence when I lay on my bed .

She climbed the bed and was touching me. I asked what her problem was because I saw her as a young girl, but she responded that I would not understand. She kept on playing with me and when I could no longer hold myself, I made love to her.”

Andrew, on his part, claimed the she agreed to be his girlfriend when he informed her that he was aware of her love affairs with Oga Emma. He said: “She replied that it was the man that was pestering her for sex.”

He added that no sooner had he given the advice to her than she started touching him in some sensitive parts of his body, after which he quickly stripped his clothes and made love to her.

He went on to say: “It was Oga Emma who went and informed her mother that I was sleeping with her daughter. The case was reported to the the police and I was arrested. I felt I had not done anything to warrant being arrested because I felt I was innocent as the girl voluntarily agreed that I should be her boyfriend.

I also told the police that I was not the only one sleeping with the girl and mentioned Oga Emma’s name.” The state Police Public Relations Officer, DSP Bala Elkana, said they’d would be charged to court, as soon as investigation was concluded, but didn’t reveal the girl’s HIV status. Cc: Nigerian Tribune