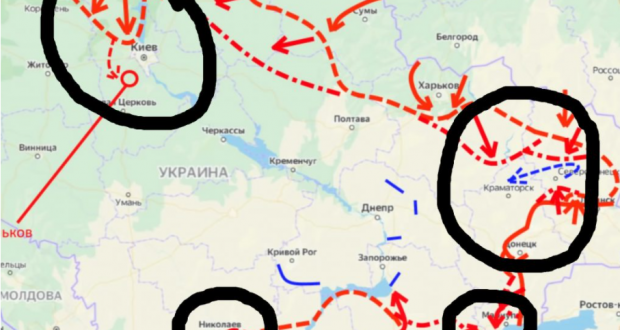 Day 3 of the Russian operation in the Ukraine –

Posted by: BalogunAdesina in Breaking News, World News Comments Off on Day 3 of the Russian operation in the Ukraine –

I found pretty decent maps on the YouTube channel of Iurii Podoliaka and I will do something ugly but, I hope, effective: add a few things to his maps with my thick black marker.

But first, this: it appears that  yesterday Putin had ordered a temporary stop to the Russian offensive while talking with “Ze” but when the latter stop talking, Putin gave a “full ahead” order.

I will begin with an older (by a few hours) map of this:

The ugly think black lines are from me.

Starting at the top left and going clockwise here is what is important:

Now, another of these maps, but updated.

Again, going clockwise can clearly see the race between the evacuating Ukie forces from the Donbass and the attempt by Russian forces to envelop them in an “operational cauldron”, exactly as predicted.

Next, Nikolaev is either fully surrounded or will be very soon.

So, what does all that mean?

It means that we are coming to some kind of informational climax here.  So far, in the West, that information is suppressed (even Sputnik and RT are under regular DDoS attack).  I won’t even bother on the 500 foot high wave of disinformation produced by western PSYOPs in the social media.  The bottom line is this, pretty soon I expect

Notice something else.  In the 2nd map, some cities in the Russian rear are circled in blue: Chernigov, Konotop, Sumy, Kharkov and Kherson.  I would add Mariupol to that list.  These are all cities which were cut of from the rest of the Ukie forces, but which still have pockets of resistance inside, that is especially true of Mariupol where a large Nazi contingent appears to be ready to take its last stand.

All this is to say that the mopping up operations inside bigger cities might take a while.  That is normal and won’t affect any outcome.

So right now the western PYSOPs can still throw out as many claims as it wants, but pretty soon the entire narrative will collapse, at which point the Russia-hating-and-bashing hysteria will reach a new feverish pitch.  Be mentally prepared for that.

I will conclude with something quite typical: remember how yesteryear tons of weapons were distributed in Kiev?  Well, overnight, various gangs have been engaged in firefights, but not against Russians (who have still not entered the city), but against each other.  Some of the wannabe Ukie Volkssturm even took a group of SBU officers prisoners.  Some rumors report 60 dead or so just overnight.

Let’s hope that this crazy nonsense stops and that some Ukrainian commanders will restore law and order before their entire country turns into a “Mad Max Zone”.  If such commanders are found, I am sure that the Russians will not only not engage them, but will even offer some degree of collaboration.

Putin tried to reason with Ze.  Predictably, this did not work.

Now the Russians badly need to find somebody to talk to on the other side.  If they don’t, Russia will have to continue to take unilateral actions and turn up the pain dial on both Banderastan and the West.

I hope to be back with a summary of the day later.

Previous: Russian operation in the Ukraine – end of day 2
Next: Day 3 – Western PSYOPs in full overdrive