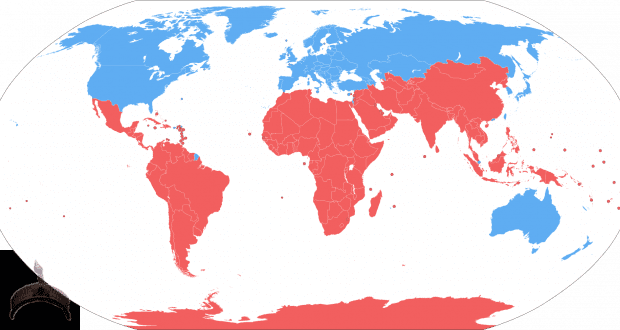 Posted by: BalogunAdesina in Breaking News, World News Comments Off on All the Young Dudes, Carry the (Russian) News

The SCO in Samarkand and the UN General Assembly have demonstrated how virtually the whole Global South outside of NATOstan does not demonize Russia.

Geopolitical tectonic plates are reelin’ and rockin’, and the sound is heard all around the world, as the twin baby bears DPR and LPR plus Kherson and Zaporozhye vote on their referendums. Irretrievable fact: by the end of next week Russia most certainly will be on the way to adding over 100,000 km2 and over 5 million people to the Federation.

Denis Pushilin, head of the DPR, summed it all up: “We’re going home”. The baby bears are coming to Mama.

Coupled with the partial mobilization of up to 300,000 Russian reservists – arguably just a first phase – the raise-the-stakes consequences are immense. Exit the previous soft format of the Special Military Operation (SMO): enter the serious kinetic war, not hybrid, against any actor, vassal or otherwise, that dares to attack Russian territory.

There’s a very short window of Chinese-coined crisis/opportunity for the collective West, or NATOstan, to negotiate. They won’t. Even as anyone with an IQ over room temperature knows that the only way for the Empire of Chaos/Lies/Plunder to “win” – outside of the cover of The Economist – would be by launching a first-strike flurry of tactical nuclear weapons, which would meet a devastating Russian response.

The Kremlin knows it – President Putin has publicly alluded to it; the Russian General Staff (RGS) knows it; the Chinese know it (and have called, also publicly, for negotiations).

Instead, we have hysterical Russophobia reaching a paroxysm. And from the deer-caught-in-the-headlights vassals, an extra toxic sludge of fear and loathing.

Implications have been sharply and rationally addressed at The Saker and by Andrei Martyanov. In the realm of the social network “influencing” – a key component of hybrid war – cheap entertainment has been provided by everyone from frightened Eurocrats to crappy retired U.S. generals threatening a “devastating strike” against the Black Sea Fleet “if Vladimir Putin uses nuclear weapons in Ukraine”.

One of these specimens is a mere P.R. frontman for an Atlanticist think tank. He was properly disposed of by the now unplugged deputy head of Russia’s Security Council, Dmitry Medvedev: “Retired idiots with general’s stripes do not need to scare us with talk about a NATO strike on Crimea.”

Freak out on a moonage daydream? Oh yeah. Tawdry wet dreams stripped off the Bowie glow.

Moscow’s rerouted strategy takes maskirovka – mask, feint, fool the enemy – to another level, actually dropping the mask, plus the velvet gloves. Now it’s all very clear: this is turbo-charged Sun Tzu (“May your plans are dark and impenetrable like the night, and when you move, strike like lightning.”)

There will be plenty of strikes like lightning ahead on the Ukrainian battlefield. This is the culmination of a process that started in Samarkand, during the SCO summit last week. According to diplomatic sources, Putin and Xi Jinping had a very serious conversation. Xi asked tough questions – as in you must finish this off – and Putin arguably explained how things would reach the next level.

Yoda Patrushev was on the road to China immediately afterward – meeting with his Yoda counterpart Yang Jiechi, head of the Foreign Affairs Commission, and the secretary of the Central Political and Legal Committee, Guo Shengkun.

Following up on Samarkand, Patrushev outlined how Moscow will help Beijing militarily when the Empire tries anything funny on the next battlefield: Asia-Pacific. That should happen under the framework of the SCO. Crucially, the Patrushev meetings were requested by the Chinese.

So the Russia-China strategic partnership is about to achieve full-fledged cooperation before the going gets tough in the South China Sea. It’s as if Russia-China were on the brink of creating their own CSTO.

And that is happening even as the Chinese leadership continues to express – mostly in private – that war in Russia’s western borderlands is very bad for business (BRI, EAEU, SCO, BRICS+, all of them) and should be wrapped up a.s.a.p.

The problem is a swift wrap-up is off the cards. Foreign Minister Lavrov, in New York for the UN General Assembly, has stressed how.

“Ukraine has eventually become a totalitarian Nazi sort of state” – unconditionally supported by the collective West.

NATOstan has predictably doubled down on its tactics since the non-response response to Russia’s demand for a serious discussion on the indivisibility of security, in late 2021: it’s always about shelling Donbass.

This could not possibly be tolerated anymore by the Kremlin and Russian public opinion. Thus the partial mobilization – forcefully proposed by the siloviki and the Security Council for quite a while now, with Kostyukov at GRU, Naryshkin at SVR and Bortnikov at FSB at the forefront.

The symbolism is powerful: after so many years, Moscow is finally fully committed to supporting Donbass to the baby bears coming to Mama for good.

There are – unconfirmed – rumors in Moscow that the decision was accelerated because GRU has intel on the Americans soon transferring long-range missiles to Kiev capable of striking Russian cities. That’s beyond a red line for the Kremlin – hence Putin’s express mention that every weapon available in Russia’s mighty arsenal will be used to protect the Motherland.

The red line is even more relevant than the much-ballyhooed Kiev all out counter-offensive, which could only happen by Spring 2023. With the partial mobilization, Russia may count on a new batch of fresh troops ready for war by the end of the year. The much-touted Ukrainian numerical advantage will soon be nullified.

Europe meanwhile may go dark and freezing, flirting with a return to the Middle Ages, but the imperial Lords of War still will refuse to negotiate. The Kremlin and the RGS couldn’t care less. Because Russian public opinion overwhelmingly understands the Big Picture. Ukraine is just a pawn in their game – and what “they” want is to destroy and plunder Russia.

Defense Minister Shoigu put it in a – factual – way even a kid can understand. Russia is fighting the collective West; Western command centers in Kiev are running the show; and the entire array of NATO military and “civilian” satellites is mobilized against Russia.

By now it’s already clear. If these NATO command centers tell Kiev to strike Russian territory after the referendums, we will have the Putin-promised decimation of “centers of decision”. And the same applies to the satellites.

This may be what the RGS wanted to do from the beginning. Now they can finally implement it, because of popular support in the internal front. This crucial factor is what NATOstan “intel” simply cannot understand and/or is incapable of professionally evaluating.

Former Pentagon advisor during the Trump administration, Colonel Douglas Macgregor, an extremely rare voice of sanity in the Beltway, totally understands the stakes: “Russia already controls the territory that produces 95 percent of Ukrainian GDP. It has no need to press further west.” Donbass will be fully liberated and the next step is Odessa. Moscow is “in no hurry. The Russians are nothing if not methodical and deliberate. Ukrainian forces are bleeding to death in counterattack after counterattack. Why rush?”

The SCO in Samarkand and the UN General Assembly have amply demonstrated how virtually the whole Global South outside of NATOstan does not demonize Russia, understand Russia’s position, and even profits from it, like China and India buying loads of gas and paying in rubles.

And then there’s the euro/dollar shuffle: to save the U.S. dollar, the Empire is breaking the euro. This is arguably the (italics mine) power play by the USG/Fed in cutting off the EU – most of all Germany – from cheap Russian energy by organizing a controlled demolition of the European economy and its currency.

Yet StupidEUROcrats are so cosmically incompetent they never saw it coming. So now they’d better start humming “Das Rheingold” all the way to a “hello darkness, my old friend” Middle Ages revival.

Switching to a Monty Python register, the sketch would run like an evil Putin masterminding the wreck of the Euro economy and industry; then making the Euros donate all their weapons to Ukraine; and then leaving NATO stranded in the fog, yelling desperate platitudes. In the end, Putin gets rid of his mask – after all, this is maskirovka – and reveals his true usual suspect face.

Previous: Everyday is for the Thief: US Forces Reportedly Smuggle 79 More Tankers Filled to the Brim With Stolen Syrian Oil
Next: Sweet Oranges